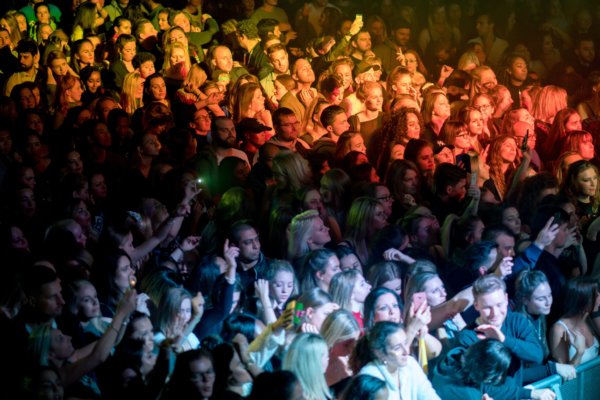 With live music having been suspended in much of the world since March last year, it was no surprise that anticipation was high for the first government approved, non-socially-distanced concert in the UK since the Covid crisis began.

With a line up consisting of Liverpool-based artist ZUZU, Wigan band The Lathums and Stockport’s Blossoms, the concert has been one of a series of events to happen across Liverpool over this May bank holiday weekend. This is in an attempt to test safety at large gatherings as part of the government’s events research programme (ERP).

The process to gain entry

The event was only open to residents of the Liverpool City Region who were registered with a local GP, in order to help control any possible spread of the virus after the gig to other parts of the country. Upon entry, all 5000 ticket holders were required to show a negative Covid test result, and proof of address (student ID was accepted for those at a Liverpool university who did not have proof of their term-time address).

Multiple test centres across the region had run lateral flow tests the previous day, the results of which were sent via text around an hour after testing. Attendees were also encouraged to pick up two extra testing kits, one to be used the morning of the gig, and one within the next five days, in order to record any spread of Covid either between the time of testing and the concert, and after the event itself.

The view from inside

From the moment of entry until Blossoms’ very last song, the atmosphere at Sefton Park was electric. Watching friends hug each other, chat to new people and dance around in a crowd was strange after a year of social distancing, but it was certainly a welcome sight; people even seemed to enjoy queuing up for the portaloos!

There was a definite festival feel to the day, with people sat on the grass sipping overpriced pints, all decked out in summery outfits and bucket hats.

After a DJ set from Katie Owen, and excellent support slots from both ZUZU and The Lathums, the crowd was more than rearing to go when Blossoms took to the stage. Opening with Your Girlfriend, the lead single from their Number One album Foolish Loving Spaces, which came out last year, it was evident that both the band and audience had waited for this moment for a long time.

The set was exciting and energetic throughout, with the indie five-piece even throwing in a cover of Paperback Writer in honour of the gig’s location. The anthemic, yet poignant My Favourite Room was a particular highlight, with people hoisting friends up on their shoulders for an emotional sing-along.

Speaking to the BBC after the concert, frontman Tom Ogden described the experience as “humbling”.

So, what does this mean for the future of live music and large events?

It won’t be until all the data, including the post-event Covid tests, have been processed that we will know the full outcome of the experiment. However, it’s fairly safe to say that, for those who attended the Sefton Park Pilot, the day was a success, with a few hours of freedom and live music being worth the entry process.

Hopefully, all the trial events which happened in Liverpool over the weekend will help to contribute to steps towards normality, not just in the UK, but all over the world, with all fingers being crossed that we might be able to see more of this by the time 21st June comes around.