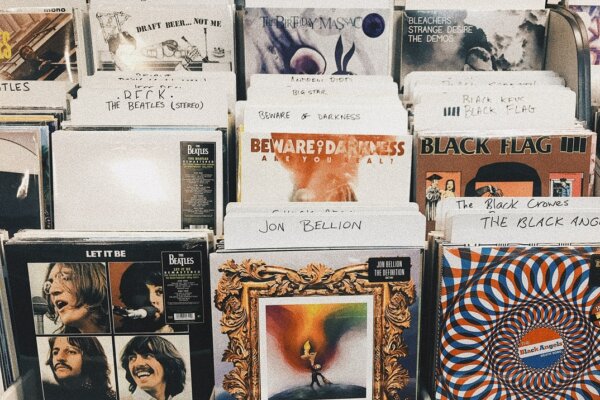 The Albums That Got Me Through (3!) Lockdowns

Now that we are out of lockdown I thought it might be fun to ask myself, what music got me through a year trapped indoors? A big question I know, but without the saving grace of Apple Music (other streaming services are available) and my vinyl record collection I truly think my sanity would have disappeared at the end of March 2020. If I look back over the past year and trace what I was listening to as each lockdown hit you can see a sea change. The positive vibes and lovely weather of the first lockdown made way for fun pop albums. The absolute grim reality of lockdown number 3 is reflected in me taking comfort in the alternative music scene that I love. And I find myself asking, does the November lockdown even count? If it means I can talk about music then it sure does. So here I am, talking you through a few of the albums that have really defined a year under the reign of COVID-19, taking you on a journey of ups and downs through the world of pop, indie, shoegaze and alternative Americana.

I won’t lie, before this album I had never really been a fan of Dua Lipa. Of course, I had heard ‘New Rules’ thousands of times in bars, on the radio and on TV but I had never paid attention to her work as a whole. Then, Future Nostalgia dropped right when it was most needed. The disco beats, the catchy lyrics, the fast-paced tempo, it was a perfect balm for a period of time where you were either stuck inside or out on a once-a-day mandated exercise break. During the first lockdown it was hard to motivate yourself to do anything, a world full of socialising and fun had been ripped away from us and I was certainly desperate for a bit of normality and optimism. Lipa’s album delivered this and was an instant mood lifter. Every song made you want to get up and dance. It’s not often that I fully lean into a new pop album but the throwback to 80s/90s pop and club music fully grabbed me and I still cannot wait to walk into a club and hear ‘Physical’ or ‘Levitating.’

Speaking as someone who is in their mid 20s, I can safely say I was there for the rise of ‘Nu Metal’ and the golden age of early 2000s bubble gum pop. I loved a bit of Limp Bizkit and Evansence but I also loved Destiny’s Child and Britney Spears, so I was absolutely obsessed when I found discovered an artist who somehow combined these two very different worlds to create something that sounded so new but also so drenched in nostalgia. This has got to be one of the few times in my life that I have really basked in new and poppy music, revelling in back-to-back albums that can only be described as full of upbeat hits (you will see by my choices below what I mean by this being a rarity). SAWAYAMA is a treat from start to finish, filled with unlikely musical fusions. Pop melodies are thrown over throbbing guitar riffs that would seem more at home on a Korn record. Songs like ‘STFU’ and ‘XS’ instantly take me back to a childhood spent flicking between the singles charts on MTV and the alternative charts on MTV 2. I loved this album so much during the first lockdown that it even resulted in me doing some online record hunting and buying it on gold vinyl, it’s just that good.

Vampire Weekend – Father of the Bride

This is a big nostalgia hit for me (if you can count a nearly 3-year-old album as nostalgic). In November 2019, I went to see Vampire Weekend on the tour for this album and it turned out to be my last gig in a very long time. So, when we were plunged into restrictions on the year anniversary of this last foray into live music I thought, what better way to celebrate than by listening to Father of the Bride for most of the month! There is something so positively summery about this album, maybe it’s the band’s slow morph into a California jam band, maybe it’s because it came out in April (spring I know but still) and I think about going to a boiling New York and listening to it non-stop as I walked around Brooklyn. Whatever the reason, it brought some summer light to a dreary month. There is something about songs like ‘Bambina,’ ‘Sunflower’ and ‘Sympathy’ that instantly lift my mood. There are hints of The Grateful Dead, jumps between genres, samples from ambient music that was once played in Japanese shopping malls and just that feel good memory of the late 2000s indie music that Vampire Weekend bring. They will always be my go to feel good band in moments that definitely don’t feel great.

We can all agree that 2020 was a terrible year but at least it gave us this gift of an album. I have only really been a passing fan of Fiona Apple in the past and once spent a week listening to nothing but her most famous song ‘Criminal,’ but there was something about Fetch the Bolt Cutters that instantly hooked me. I was extremely late to the party on this album having let the hype of a rare 10/10 Pitchfork rating pass me by. I watched as everyone talked about this album on social media and then presumably, I returned to listening to a Talking Heads album for the millionth time that month. So, when lockdown number 2 hit, I thought why not give it a listen? And as soon as I started I couldn’t stop. There is just something about Apple’s album that is addictive, the first time I heard ‘Shameika’ I instantly had to listen to it again and again and again. It is an album that is both insular and expansive, personal and relatable. The prior mentioned Pitchfork called it ‘unbound’ and ‘a symphony of the everyday’ and that really is the best way to describe it. It has grand tracks that demand you sing a long and darker gnarled moments that demand you listen, it truly was the perfect album to just sit down and listen to while stuck in seemingly endless COVID quarantine.

I can’t really put how much I love the late great David Berman and Silver Jews into words so I’ll just say stop what you are doing right now and get on whatever streaming service you use and listen to Silver Jews’ discography, it’s worth it I promise. Once you hear the words of David Berman you will be hooked and end up listening to a Silver Jews album (or the Purple Mountains album) at least once a day. American Water is the group’s most well-known output and the first album by them I ever listened to, so it is one I will constantly go back to. They do always say the first album you hear by a band will always be your favourite after all. To start a record with an opening line stating ‘in 1984 I was hospitalised for approaching perfection’ is in itself is just pure perfection that instantly pulls you in to the world of one of the greatest lyricists of all time. Berman is a poet through and through — his words are beautiful, they are funny, they are heart breaking, they are incisive and insightful. Every song is better than the last. I listened to this album for the majority of the last lockdown, sometimes I would listen to it everyday because once you hear a song like ‘Random Rules,’ ‘People’ or ‘Honk if You’re Lonely’ it’s hard to want to listen to anything else.

If I am anything, it’s hip and down with the kids and very into current music. This can be seen in the fact that my two most recent lockdown choices are from 1998 and 2000 respectively. Like with Fiona Apple, I had only ever had a passing interest in PJ Harvey despite the fact that I do own this album. So, while I was working one day I thought why not dig out the old Stories from the City, Stories from the Sea CD you’ve always neglected and put it on as background music and I’ll tell you what, I absolutely loved it. Critics have derided this album as one of Harvey’s least introspective albums and see it as something wrapped up in her joy rather than her usual darkness. But who cares? 21 years later this is an album to be discovered and enjoyed. ‘Good Fortune’ is one hell of a song that frequently pulled me out of a dark place during a winter spent inside. It makes me want to go out and strut around like Polly Jean, full of confidence with not a care in the world. If I was a teenager in 2000, I would have been obsessed with this album. Everything from Harvey’s voice to the deft music and lyrics to the Thom Yorke collaboration on ‘This Mess We’re In’ makes this album just a perfect listen and a lockdown saving grace.

I mean come on, this is an iconic album and it came back to streaming services in time for the end of lockdown! Maybe this makes the past year worth it? (I’m kidding but if you need me, I will be in my room acting like an angsty 15-year-old listening to some shoegaze).