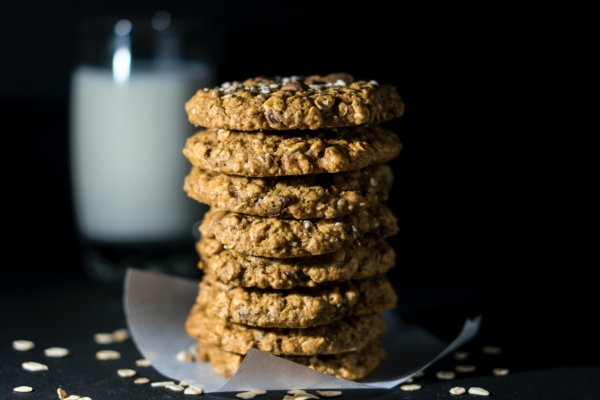 Mark ANZAC Day with these bonzer bakes from Down Under…

Every year on 25 April (ANZAC Day), you pay tribute to the bravery of your armed forces, in wars past and present. This year, as a nation, we also wish to pay tribute to you, for:

a) Your sun-soaked soaps, which got us through the winter months of lockdown, and continue to provide our daily dose of Vitamin D;

b) The calibre of your singing stars (most especially Kylie), as proven every year by Eurovision;

c) Some excellent bakes (even if your two nations continue the tug-of-war over the origins of pavlova… and Russell Crowe).

We remain envious of the efficacy of your anti-Covid measures, and your astoundingly low infection rate. We hope we’ll be able to come over for a visit sometime soon! Until then, stay safe,

P.S. Thank you, too, for WiFi and the flat white, boomerangs, zorb balls, and bungee jumping, as well as plastic bank notes and personal jetpacks.

Controversially titled, uncontroversially tasty: think cornflake cake meets walnut whip. Ensuring the biscuits are comprehensively chock-a-block with choc, they are each dolloped with a mound of cocoa-infused ganache. Some say this is why the biscuits are named as they are: their peaked and rugged appearance can be seen to echo the Afghan landscape. Others object that the name references the nineteenth-century Anglo-Afghan war. Personally, I say make biscuits, not war, and the recipe below even has step-by-step pictures to help you in your hour of greed- oops- need.

When Father John Fahey, resident Catholic padre during WWI’s Gallipoli campaign, received his regiment’s food rations, he is said to have proclaimed: ‘The man who invented the army biscuit was an unmitigated rascal.’ Thankfully, since their origins as hard-wearing troop fare for the Australia and New Zealand Army Corps (ANZAC), the recipe has been improved somewhat. Major-ly, in fact. Today’s incarnation is toasty with oats and chewy with golden syrup: essentially a flapjack’s far superior cousin. Meanwhile, the two nations have called a truce as to its origins, satisfied to jointly salute its scrumminess instead.

A sweet snack so good, they named it twice! In his 2007 victory speech, Australian ex-PM Kevin Rudd suggested his team should toast their success in tea and VoVo biscuits, not champagne, before settling down to the serious business of running a country. The biscuit also gets a shout-out in the 2015 Kate Winslet film, The Dressmaker (Don’t let VoVo, Jack…). What statesman and seamstress alike are salivating over is a crisp wheat biscuit topped with rosy fondant icing and raspberry jam, dredged with a flurry of desiccated coconut. Although the decor requires a little patience, the end-product has some undeniable VoVo-voom…

Question: How do you improve upon a classic, jam-and-cream-stuffed Victoria sponge? Answer: Smother it in chocolate, roll it in coconut, and call it a lamington. This simple recipe even features a video to guide you through the creation of this classic Aussie teatime treat. As with the boomerang, it’s likely one you’ll return to again… and again…

The last of the desiccated coconut trifecta, this sweet-tooth’s staple has been gracing Kiwi tables since the ’Forties. Its longevity is likely down to its Picassoesque looks, undeniable scrumptiousness, and status as a 5-ingredient wonder. One of the chosen five ingredients is ‘lolly’, Kiwi slang for ‘sweets’ or ‘candy’; traditionally Eskimos/Explorers are used in the land down under, but liquorice allsorts make a worthy substitute, as do foam shrimp/banana, Pick ’N’ Mix style. The end result is similar to the Northern Irish confection ‘fifteen’- which, incidentally, is how high the Lolly Cake rates on the food Richter scale. Enjoy!

A fabulous bake, or some fantastic, Pat Butcher-worthy earrings? Those (sane enough to be) plumping for the former may be interested to know that the Neenish Tart comprises a shortcrust pastry bake piped with berry jam and ‘mock cream’, finished with a yin-yang chocolate/icing combo. Like Pat Butcher, it’s been around for a while, having first been mentioned in a newspaper column back in 1895. Also like Pat Butcher, the traditional recipe’s a bit ’ard- which is why this version suggests stepping out for some shop-bought shortcrust instead. Go on, ’ave a Butcher’s…