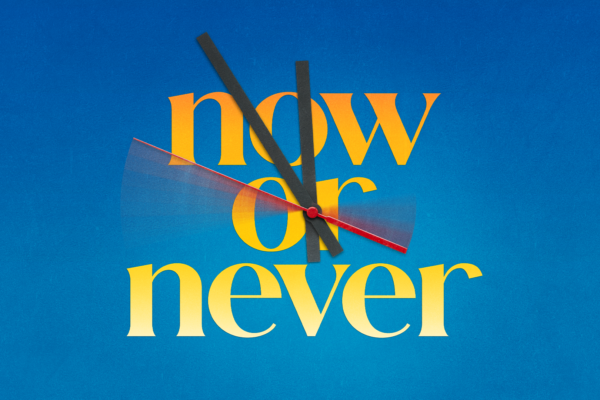 As we’ve frequently made known in previous reviews for productions including The Picture of Dorian Gray, The Secret Society of Leading Ladies and What a Carve Up amongst others, the Barn Theatre are leading the way when it comes to innovative digital theatre. Their latest production, Now or Never, is quite possibly one of the most innovative yet. Now or Never is a song cycle, telling the stories of 7 people as they respond to the knowledge that the world will end. Much of the show hits close to home and it is a heartwarming, beautiful piece of online theatre.

Matthew Harvey wrote the song cycle and created the concept for it. His music is varied and all works brilliantly for the piece. These songs will surely soon become musical theatre standards. The audience really becomes invested in these characters despite not seeing them for very long. Ryan Carter is the creative director and once again, his work is impressive. The song cycle was streamed live in one continuous camera shot. It was completely smooth and there no technical glitches at all. Freddie Tapner is the musical director for the production. The orchestrations sound wonderful and it sounds as though the band is quite big. It would have been nice to see the band playing together though. Harry Smith’s sound design is excellent, considering it was all live from the venue. Everything was perfectly mixed.

Matthew Harvey also opens the show. He has the energy required to start the show on a high and set the pace. His voice is also very powerful. Katie Shearman follows singing about dogs! This provides a lighter moment before things get a bit more intense and her voice soars. Lucy St Louis’ vocals are also stunning to listen to and she has a wonderful warmth to her performance. Irvine Iqbal’s performance feels grounded and real and his voice is rich and a delight to listen to.

Eloise Davies and Courtney Stapleton are a highlight of the song cycle. They play a young couple and their on stage chemistry is beautiful and believable. It is refreshing to see 2 women being a couple on stage without the piece making a big deal about the fact it’s a same sex relationship. It is performed and written as if this is normal, as it should be. Their voices also work very well together throughout.

Ahmed Hamad completes the cast. His performance is real and believable. His vocals are a joy to listen to and sound completely flawless and effortless. He is sure to be a star in the making. The whole cast come together at the end of the piece and a sing a finale number together, which is brilliantly impactful.

Now or Never is a beautiful look at what really matters in life, told by exceptional performers through wonderfully written songs. I would have preferred to watch it without the performers using hand held microphones as sometimes it felt like they got in the way of the storytelling, but hopefully this will come as the technology becomes more familiar. I very much hope that we see this song cycle again, perhaps further developed and longer. It definitely left me wanting more and to see more of the stories of these characters.

India’s Coronavirus crisis and how we can help.

Student Small Businesses: How to support your local entrepreneurs