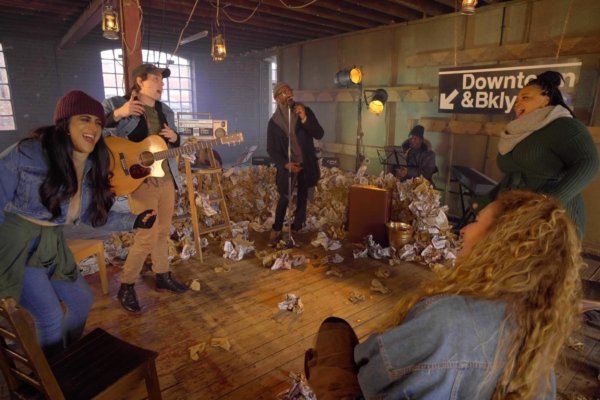 Lambert Jackson Productions have been one of the leading players in online musical theatre during the pandemic and this week, their latest production, BKLYN the Musical, has started streaming. A troupe of street performers tell the story of a young girl who goes to the USA to find the father she never knew. This is a show that celebrates the arts and storytelling, as well as the importance of community. This musical isn’t particularly well known, apart from the song Once Upon a Time, and it wasn’t a personal favourite of mine. However, it is an exceptional production of the musical and a demonstration of how online theatre should be done.

BKLYN the Musical has music, book and lyrics by Mark Schoenfeld and Barri McPherson. There are some great musical numbers in the show, although none seem hugely memorable, apart from the hugely popular Once Upon a Time. The story feels a little slow to get going but once antagonist Paradice is introduced and central character Brooklyn has some conflict to overcome, the pace picks up and the musical becomes much more engaging and interesting.

Dean Johnson (First Date, Godspell, Dogfight) directed this production. He has done an incredible job. It is visually amazing and melds between the street performers telling the story and the actual story coming to life brilliantly. Leo Munby (The Last Five Years, Gypsy, Dogfight) is musical director and the small band led by him sounds great. He is joined by Richie Garrison on saxophone and Georgina Lloyd-Owen on cello, but the arrangements sound full and never lacking. The vocal arrangements are gorgeous and beautifully performed by the cast. Andrew Exeter (The Last Five Years, Hair in Concert, High Fidelity) designed this production of BKLYN the Musical and the piece is beautiful to watch. The design is so inventive and the lighting design really helps with the transitions between ‘reality’ and the events within the story. The conflict between the grit of reality and the glitz and glamour of showbusiness is shown perfectly in the design. Sam Diaz must also be given praise as video editor and for piecing it all together so smoothly and helping the production flow seamlessly.

The cast of five are strong and all give good performances in their own right, but work incredibly well as an ensemble. Emma Kingston (Evita, Fiddler on the Roof, In the Heights) leads the cast as Brooklyn. Her vocals are sensational and her rendition of Once Upon a Time definitely lives up to expectations. She even accompanies herself on piano! However she particularly shines in the softer and more emotional songs which she performs beautifully. Newtion Matthews (The X Factor, The Voice, One Love: The Bob Marley Musical) is fantastic as the Street Singer, who acts as the Narrator. His voice is gorgeous to listen to. He also has a great stage presence and he is completely captivating and engaging.

Marisha Wallace (Dreamgirls, Waitress, Aladdin) plays antagonist and washed up singer Paradice. Her vocals are good and she sounds particularly strong in her ballad and where she can bring in more of her wonderful soul quality. She really shines in her acting performance though. She is perfectly dislikeable but never feels over the top. The scene before she takes to the stage of Madison Square Gardens was particularly moving and a highlight of the production.

Jamie Muscato (West Side Story, Heathers, Big Fish) takes on the role of Taylor. His performance is brilliantly intense. His vocals are also a delight to listen to and he evens plays guitar live. The scenes between Muscato and Kingston are beautifully tender to watch. Sejal Keshwala (Everybody’s Talking About Jamie, Bend It Like Beckham) plays Faith. She gives a lovely performance and her vocals are gorgeous. She is, however, criminally underused and it would have been nice to see more from her.

BKLYN the Musical is a heartwarming story of love and community. Although it wasn’t my favourite musical in the world, it was performed and produced phenomenally. This is how you do an online musical!

Be sure to get your tickets here. They cost £15, plus a £3 transaction fee. Streamed performances run ‘as live’ are available until 28th March. The show can also be streamed on demand from 29th March until 4th April.