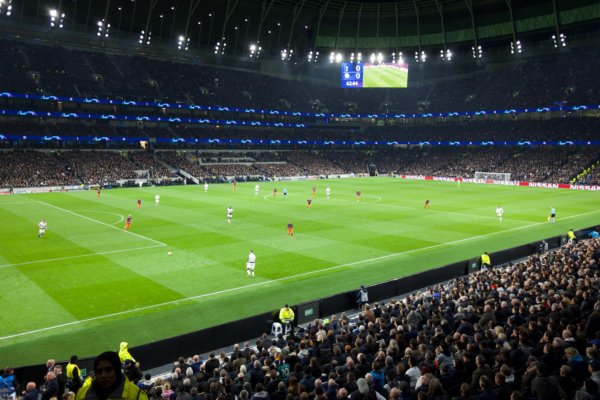 November 29th 2020, Rossett Park, Crosby, Merseyside. Marine FC, who play their football in the 8th tier of English Football, have a free-kick in the 120th minute of Extra Time in the Second Round of the FA Cup against Havant and Waterlooville FC. The score is 0-0, and Marine are on the verge of facing their third penalty shootout in the competition already this season. But with the final play of the game, the ball is lifted into the box, knocked down by a Marine player, allowing captain Niall Cummins to bundle the ball over the line. Remarkably, the Merseyside club knock out another higher-level opponent, and await the Third Round draw in anticipation. They are the lowest ranked team left in the competition, but on the day of the draw, their ball number, 58, is drawn out, followed by ball number 39. Tottenham Hotspur. Top of the league at the time of the draw, Spurs will be travelling to Crosby to play against Marine FC.

On Sunday 10th January 2021, Merseyside team, Marine FC, face the biggest test in the club’s incredibly long history. Jose Mourinho’s Tottenham Hotspur will be coming to the city, but not to play against Liverpool or Everton as they vie for a place in the Champions League. On this occasion, Harry Kane, Son Heung-min and the rest of team will be coming up against Northern Premier League Division One North West side, Marine FC.

It wasn’t too long ago that Tottenham completed their £1bn stadium, or that their lead striker captained England, or that their goalkeeper won the World Cup, or that they themselves were in the Champions League final. But the players and staff at Marine FC, who sit over 160 places behind Spurs in the Football Pyramid, aren’t letting the size or wealth of their opponents taint their determination or optimism. I was able to chat to Marine centre-back, Adam Hughes, who shared an insight to the club, the journey and his own career so far.

“The biggest game ever”

Aged 24, Wirral-born Adam Hughes is currently in his second spell at Marine FC. On loan from Welsh Premier League (Cymru Premier) side, The New Saints FC, he had always dreamt of getting past the First Round of the FA Cup in his career. That dream not only became reality, but was bettered, as Hughes now faces the prospect of defending the likes of Harry Kane and Son Heung-min in the Third Round of the competition. When I asked him about the mood in the camp, he shared how for him and many other Marine players, this was the “biggest game ever” and that “excitement was starting to build”.

Hughes joined Marine at the start of the season on loan until January, but has since has his contract extended until the end of the season. He told me about his connections with the club, having had a spell there in 2016 until the end of the 2017/18 season, and how he loved how it was a local team for him. Already knowing some of the players and coaching staff, Hughes had no hesitation in joining the club for a second time.

One of the strongest messages I picked up in my interview with Adam, was the incredible team spirit and cohesion within the squad. On hearing they would face Spurs in the next round, he revealed to me how ecstatic everyone was, and that “group chat went mad” as they got their heads around the fact they would be playing Premier League opposition. However, this is not the first time that Adam Hughes has played against a big side in a big competition.

“Just another game of football”

Hughes insists the upcoming game is the biggest match of his career, and indeed the prospect of playing a side like Tottenham is staggering for the Marine players. But the Marine centre-back has experienced Champions League football in past with his club The New Saints FC, coming up against Danish giants, Copenhagen, as well as the Kosovan champions. With this in mind, I asked him how does one prepare for a game against a side that on paper is much bigger? He told me “you have to try not to think about it too much…its just another game of football” and that they at Marine, like they had done at The New Saints for their European adventures, “try to prepare the same way for every game”.

Hughes made it very clear that it would be incredible for him to play against internationals such as Kane and Lloris, and that he isn’t necessarily hoping that Mourinho puts out a weakened team. “You want to play against the best players, and even if they do rest players, you look at their bench with Lucas Moura and Erik Lamela – that’s a big bench.” The sheer excitement at the club is an amazing thing for this city, but with the Government’s recently imposed lockdown, fans were left distraught when it was announced that the game would take place behind closed doors. For Hughes, “the fact there’s no fans is the saddest thing” but he and the club were overwhelmed to find out that nearly 6000 people had bought virtual match tickets, despite the match being shown live on the BBC, which is almost double Rossett Park’s (Marine Travel Arena) capacity.

Earlier this week, local footballing legend Jamie Carragher announced that his charity, JC23 Foundation, will sponsor Marine FC in their tie against Spurs on Sunday. With their previous sponsor pulling out just days before the game, the ex-Liverpool centre back, who himself lives in Crosby, revealed that the organisation will brand pre-match warm up kits as well as the dugouts. The JC23 Foundation is involved in a whole range of good causes, providing aid to disabled, sick and disadvantaged children. Hughes spoke about how what Jamie Carragher is doing for the club is “really special” and that the fact he’s doing his bit for the community is amazing to see. Carragher has visited Rossett Park a few times, with it being his most local club, and Hughes shared his delight at having a player of his stature being associated with the club.

I would like to personally thank Adam Hughes for taking the time to talk to us. Although his contract is up at the end of the season, Hughes is open to idea of staying at the club for a another spell, but we wish him and all those at Marine FC all the best for Sunday and the future. This is a journey that sports fans in Liverpool will never forget. As Marine FC sit in sixth place in the Northern Premier League Division One North West, they’ll be hoping that once they’ve played their historic tie against Spurs, whatever the result, they can push on for promotion and climb the tiers of English Football.

If you want to support Marine FC by watching the game virtually through the club, you can buy a ticket here. Alternatively, you can watch the game live on BBC One on Sunday 10th January, with build up starting at 16:30 GMT.