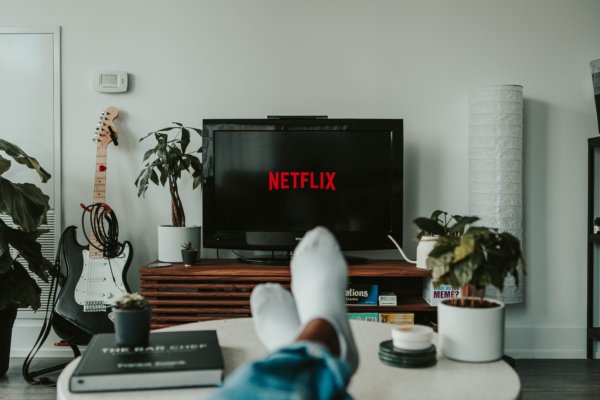 Derry and Bright: A Night in with The Derry Girls | Review

‘Catch yerself on,’ as Ma would chide. Gags have been penned, scripts typed. Michelle is poised to ogle some more ‘rides’; Orla is still dreaming of a ride in a Renault Clio. (Perhaps to Paris, to meet Nicole…?) But Covid-19 has scuppered proceedings, forcing to a halt any plans of filming. So, in the meantime, to fill that ClareErinJamesMichelleOrla(Sister Michael?)-shaped hole in our lives, there’s ‘A Night in with The Derry Girls’: a Fane-sponsored, Zoom-style session with show creator Lisa McGee and lead Saoirse-Monica Jackson (a.k.a. Erin Quinn). Plus, there’s the book they spend a large portion of the 55-minute livestream plugging: Erin’s Diary: An Official Derry Girls Book. Essential reading for Derry (fan)Girls everywhere, it’s also the ultimate excuse to rifle through another’s journal and discover their innermost hidden thoughts and feelings. Not that any of Erin’s are exactly buried deep. In consciously curly cursive, the cover of Erin’s diary proclaims she hearts ‘D.D. 4 EVER,’ alongside (plastic) pearls of wisdom like ‘Dreams can come true,’ and ‘Writing is a calling- not a choice.’

How very Derry: The cast of Channel 4’s Derry Girls.

It’s fitting, then, that the interview, led by a somewhat starstruck Daisy Buchanan (no, not that one), began with a discussion about diary-keeping. Lisa (relatably) admitted to starting a New Year’s resolution-fuelled journal most years, only to have it peter out at page 3 as she realised she lacked any sort of commitment to the project. Saoirse, meanwhile, stated she stopped hers circa age 16, after cottoning on to exactly how her ma kept discovering her not-so-secret sins: sneaking out of the house at night to meet boys, for example, or skipping school for a shopping spree. Observations like this trigger head nods from interviewer Daisy, and surely audience members worldwide. Be it Derry, 1990, or Doncaster, 2020, it seems the antics of teenage girls never change.

That’s presumably one of the (many) reasons the Channel 4 show has proved so popular. Derry Girls is the most-watched television series in Northern Ireland on record, with the first series squeezing a big, fit, juicy 100% approval rating from review aggregator Rotten Tomatoes. The site applauds ‘its predictably unpredictable romps and uncanny characterisations.’ It’s true: the five girls (the ‘gang,’ as Lisa calls them) are so instantly recognisable from real life. (Wait- it’s just the four girls. ‘I’m a BOY,’ protests James, repeatedly.) There’s the Brash One, the Kooky One, the Neurotic One. Scriptwriter extraordinaire McGee observes that they are similar enough to be friends, different enough to be interesting in the context of the show- as well as to constantly get on one another’s nerves. A Myers-Briggs personality test would probably show up a one- letter overlap between each two of them. It’s a perfectly calibrated dynamic. And does it sound familiar? Yep, my friends, too…

Lisa McGee Whizz: The show’s creator, who has also helmed hits including Indian Summers and this summer’s The Deceived.

What is less familiar is the show’s backdrop. ’Nineties (London) Derry, Northern Ireland, mid-Troubles. Not the optimal conditions for comedy, you’d presume. Yet the show manages to excavate humour from the mundane realities of everyday life in an occupied city. If Andrea DenHoed has referred to ‘the Trauma of the Troubles,’ Derry Girls showcases, tastefully, the Traum-haha.

‘Well, I don’t know about the rest of you, but I’m not enjoying this bomb,’ pronounces Aunt Sarah. ‘Disgusting and disgraceful.’ The explosion has stopped her from getting to her scheduled sunbed appointment: ‘It’ll play havoc with my build-up.’

Jackson and McGee, both Derry natives, discussed the show’s historical context at length during the broadcast. Both recollect soldiers on the streets; both are grateful a comic portrayal of a national tragedy has been so well received.

Meanwhile, secrets of word and of wardrobe are also spilled. Apparently, the costumes look so authentic because many of them are actually vintage pieces borrowed from McGee’s mates. The words, meanwhile, were borrowed from McGee’s memories of teenagehood (so they were). They’re not so niche, though, as to be off-putting to an international audience. For Derry Girls has gone global. This has been helped along by the recent nostalgia for all things ’Nineties: high-rise belted Mom jeans, choker necklaces, endless reruns of Friends… On the topic of Friends, Saoirse revealed (in response to an excellent question from Daisy) that her ideal cameo would come from Courtney Cox. A Geller among Gaelics, eh? On the topic of necklaces, Lisa had on an excellent one throughout the session: on a slim gold chain, flowing gold cursive proclaimed her to be a ‘Derrygirl.’ Jewellery sure to spur many a merch search!

Saoirse herself was sporting some enviable hoop earrings, looking chic but comfortable in a monochrome varsity sweater as she discussed some of her character Erin’s more questionable outfit choices (for pictorial evidence, see below). One of the boons of Zoom livestreams like this is that the stars can be so comfortable: they are quite literally at home being interviewed. At one point Saoirse even slid a bobble off her wrist and hoiked back her hair into a high pony, webcam doubling up as mirror. Dialogue wasn’t stilted but full of the stop-starts and overlaps of, to borrow from another Irish lass, Conversations with Friends. Apparently it’s usually difficult at a Derry Girls cast meeting to get a word in, edgeways or any-which-ways.

Unfortunately, in this particular ‘A Night in with…’ session, the virtual audience didn’t manage to get a word in, either. The only questions directed at Derry Girls nos. 1 and 2 came from interviewer Daisy. (Not that they weren’t inspired: ‘Who would you least like to be locked down with?’ was my personal fave, to which Mc Gee deadpanned, ‘Uncle Colm.’) The evening would also have benefitted from some (low)tech wizardry: a pic or clip from the show to illustrate their points, perhaps. Well, I say ‘evening.’ Not necessitating any Ma-style sleuthing, from the light streaming through the blinds behind Daisy, Lisa and Saoirse, it was clear the ‘livestream’ had been recorded prior to its November evening airing.

Knit-picking: One of Erin’s suspect style decisions from the show’s second series.

If the interviewees’ rooms revealed the sham by being far too bright, though, this was more than made up for by the bright and sparky dialogue of the interviewees themselves. Overall, I was left with a newfound admiration of the particular genius of the sitcom that is Derry Girls. ‘Catch yerself on,’ Ma might say. ‘Catch yerself up,’ I would say to all those yet to watch the show. Myself, I’m off to rewatch…

Derry Girls, series 1 and 2, is available now on All 4. The first series can also be viewed via Netflix. For full listing of Fane’s celebrity livestream programme, and details of how to access a recording of the Derry Girls session, visit their website, at www.fane.co.uk. Erin’s Diary: An Official Derry Girls Book, RRP £16.99, is available now.