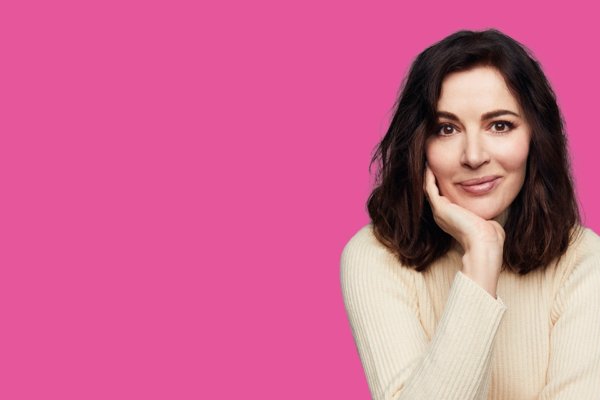 A livestream session with the OG DG (that’s Domestic Goddess to us mere mortals) offered insights into everything from anchovies to zen living.

‘If music be the food of love, play on!’ exhorts Shakespeare, via mouthpiece Duke Orsino in Twelfth Night. But what if ol’ Bill got it wrong? What if it’s the other way round?

It was just this notion which began ‘A Night in with… Nigella Lawson,’ a Fane-sponsored, Zoom-powered, hour-long foodie fandango, a virtual promo of the author-presenter-chef’s latest offering, Cook, Eat, Repeat (Chatto & Windus, £26.00) tailored to our times, plus general natter. So to our compere Tom Sutcliffe Ms. Lawson’s cookbook was composed, much like an album, of A-sides and B-sides. There are thus firm foodie favourites to be found alongside ingenious new inventions. To the latter, the fish finger bhorta (below) certainly belongs: think freezer-food staple meets moussaka. The celebrity chef loves riffing on certain ingredients (in Simply Nigella [2015] it was the radish, while Cook, Eat, Repeat offers entire chapters devoted to, randomly, rhubarb and anchovies). Plus, Nigella admits to penning far more recipes (tracks?) than could ever fit in a cookbook (album?). (Okay- I’ll stop stretching the food/music metaphor now.)

Just where does she find her inspiration from? She informs a captive home-bound audience it’s a combination of, among other things, Twitter, obsessive taste-testing, and the six thousand recipe books she owns. (Not enough! she insists.) She’s a commanding interviewee, used to the camera despite an extensive presenting portfolio. Plus, she’s eloquent and attentive when posed with audience questions, which are nicely interspersed throughout the hour, not all shunted to the end as is traditional. She cuts a svelte figure in a simple black shift dress, though not suspiciously so: never trust a skinny chef, she’s (quite rightly) warned on past occasions. Paired with cerise suede button-down ankle boots to add a pop of colour to the ensemble, she exudes an effortless chic also to be found in her recipes. And if you think food cannot be chic, I’d suggest you take a look at her sublime Ruby Noodles (which, incidentally, are well-matched to her footwear…).

Oxbridge education very much in evidence, she peppers her speech with ‘ones,’ while discussing a number of subjects ranging from anchovies to zen. With the former, she’s keen to air her newly-coined anchovied and anchovize: well, if Shakespeare can make up words by the thousand, Queen Bey strongarm ‘bootylicious’ into the OED, why shouldn’t the Domestic Goddess stage a briny seafood vocab coup? With the latter comes the undeniable observation that the kitchen can be a safe space in a world spiralling into insanity: why else would Google’s most searched for term during lockdown have been ‘Banana Bread’? As Nigella quips, cooking is a shortcut to stilling ‘that chattering monkey mind.’ We could all do with a little food-induced mindfulness in the current climate.

Monkey Minds Love Banana Bread: the ‘aromatic fug’- generating ‘Banana Bread’ from How to Be a Domestic Goddess (p. 33).

Given that Cook, Eat, Repeat was edited during lockdown, were there any alterations? Yes, apparently. The cookbook has been made conducive to a post-Covid world. Dishes feeding the five thousand have been shelved in favour of more modest, five-person-at-most affairs. Perhaps following the Greta effect, midway through the session Nigella also pronounces a paean to the using-up of leftovers. Then again, maybe not. Without wishing to get too personal, Ms. Lawson’s been cooking since long before the climate-saving Swede’s been alive and kicking- her first cookbook, How to Eat, was released back in ’98. That makes it the same age as Google, and for the devoted culinarist, it answers just as many questions. No wonder Nigella’s sitting on sales figures of upwards of 3 million.

DG Devotee: My attempt at Nigella’s ‘Coconut Snowball Cake’ from At My Table (p. 260).

The lady herself does get personal during the interview, though, revealing that an innate clumsiness and parents edging towards food fascists made her dread family mealtimes. Today, she’s wise enough to warn against the concept of ‘guilty pleasures’ completely. ‘There can be so little joy in life,’ she cautions: it’s best to consume it when we can! Likewise, food fads are dismissed as mere frippery. She’s still to be found eating salted caramel, despite it being (as the Black Eyed Peas would say) ‘so 2008.’ Plus, she’s happy to use herbs out of date since the ’Nineties, whatever the Best Before Brigade may think. (Again: props from Greta for this!)

It’s the combination of this down-to-earth ethos with recipes for dishes tasting out-of-this-world that makes Cook, Eat, Repeat a monumentally easy sell. As it’s in fact an amalgamation of recipes and mini-essays (what Nigella dubs ‘culinary stream-of-consciousness’), subtitled ‘Ingredients, recipes and stories,’ the evening is rounded off with a ‘Roly Mo’ mo, the author indulging in reading aloud a short snippet. (Incidentally, on the topic of ‘momos,’ you’d be wise to click here in the not-too-distant future.) Despite being a highlight of the night, the ‘Show & Tell’ vibe could have realised its full potential with something to, ahem, show. Indeed, throughout the evening a central screen of recipe pics was missing: we needed some food porn to ogle. Oh, and smellivision would have been much appreciated too, please and thank you! After all, the archetypal domestic goddess is said to be found ‘trailing nutmeggy fumes in her languorous wake.’

Cook, Eat, Repeat: Ingredients, recipes and stories (Chatto & Windus, R.R.P. £26.00) is out now. Fane Online are hosting frequent celebrity livestream sessions, also available to view after the event, the full list of which can be found on their website. Upcoming events include ‘A Night in with… Nadiya Hussain’ (9 December 2020), former Bake Off winner and mental health advocate.

New Launches for the Festive Season