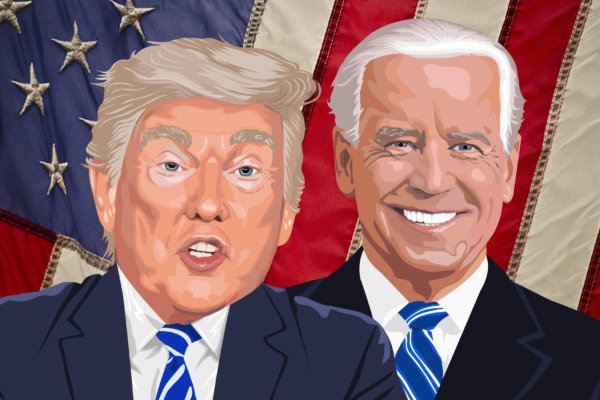 One week to go: A basic guide to the US Election

Across the pond, they’ve got a big decision to make. Should Trump lead America for another four years, or is it time for Obama’s vice-president Joe Biden to have a crack at the top job? As the campaign enters its end zone, this guide tells you who’s who, what’s at stake, and how the election will actually work.

Let’s start with the candidates. Who is Donald Trump, and what does he stand for?

How about his challenger, Joe Biden?

Joe Biden had to fight to become the Democratic Party’s candidate to take on Trump. His closest rival for the role was Bernie Sanders. Comparing the two is a bit like comparing Tony Blair and Jeremy Corbyn. Biden, like Blair, was the centrist, middle-ground option.

Consequently, some Democrats argue that their candidate’s plans in areas such as the environment are not radical enough. However, his status as the middle-of-the-road politician could make him more likely to appeal to 2016 Trump voters who are considering changing their minds.

Biden’s campaign is all about character. He says he wants to restore decency, dignity, and compassion the office of President, as well as taking action on the pandemic, carbon emissions, racial justice, and economic inequality. The former vice-president’s supporters believe he’s the man to repair what they see as a broken and divided nation. On the other hand, his critics argue that corporate tax rises and increased environmental and labour regulations will damage jobs and wages.

How does the election actually work?

This is where things get complicated. The national president is being elected, but the voting takes place at state level before the electoral college system is used to decide the winner.

In each state, the candidate with the most votes wins that state’s electoral delegates. The number of delegates is based on population; California has 55 delegates while Vermont has just 3.

Once all the states have counted their votes, the candidate who has won the most delegates is elected president. With a total of 538 delegates up for grabs, candidates need a minimum of 270 to have a majority of electoral college votes and clinch the election.

What’s important is that whoever gets the most votes in a state – whether 51% or 99% – gets all of that state’s delegates. Attracting more of a certain state’s voters will not help a candidate, unless he can gain enough to win the state. That’s why we don’t see Biden campaigning in the Republican haven of Alabama, or Trump in the heavily Democratic California.

So where is the fight won and lost?

It’s the swing states – those that could go either way – which will decide the presidency. That’s why we see Trump and Biden concentrating their campaigns on the likes of Florida and Pennsylvania. In these places they both have a chance of getting the most votes, and therefore winning delegates that count towards that crucial 270.

This also means that national polls can be misleading. A candidate could get the most votes overall, but come first in fewer states and therefore lose the election. This is what happened to Hilary Clinton in 2016, when she failed to win the presidency despite getting over a million more votes than Trump.

Joe Biden is undisputedly the front runner, but victory is far from guaranteed.

The latest polling averages from RealClearPolitics give Biden a substantial national lead of around 8%. More importantly, they put him ahead in most of the key swing states, albeit by a small margin.

However, as well as the fact that polls are never perfect, there are two caveats to these predictions. First of all, things can change quickly when the margins are so thin. In fact, just over a week ago, Biden’s campaign manager sent a memo to supporters warning them not to get complacent.

“In the key battleground states where this election will be decided, we remain neck and neck with Donald Trump.”

Secondly, in a mid-pandemic election with an unpredictable incumbent, there is no knowing what could shake things up. Trump has attempted to discredit mail-in voting, which could cast doubt on the election result. With the president on record as saying that “the only way we’re going to lose this election is if the election is rigged,” there is the possibility of a hard-fought battle even after the votes have been counted.

One thing is certain: There is a lot at stake.

For Trump fans, this election is the chance keep making America great again. They would see a victory for Joe Biden – who’s been in Washington politics for 47 years – as the exact opposite of ‘draining the swamp.’

On the other side, many of those voting for Biden see this election as their last hope to stop climate change, to get the coronavirus under control, and to restore some semblance of economic and racial justice to a bitterly divided country.

And for us onlookers from the other side of the Atlantic Ocean, this contest is more than just a spectacle. America remains the world’s strongest military power, its largest economy, and its most influential democracy. The next President’s decisions, particularly in terms of foreign policy and climate change, will have reverberations around the world.

Whichever side you’re on, one thing is for sure. This election matters.

For more coverage of what’s going on in America, keep an eye on LGSM TV for an upcoming US election piece.