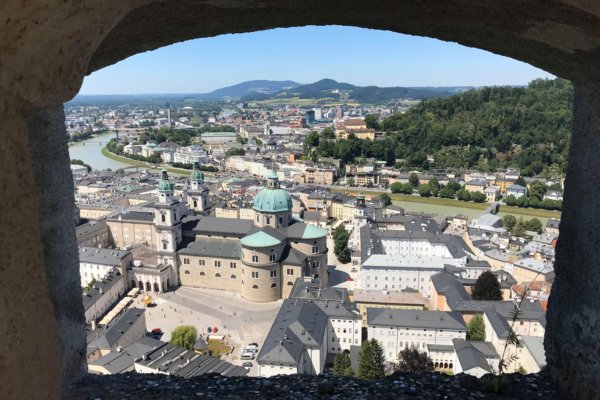 As part of The Shows Must Go On series on YouTube, a channel that was set up at the start of lockdown to stream live theatrical productions, I decided to watch The Sound of Music. The 2013 television special, an adaptation of Rodgers and Hammerstein’s beloved musical, stars Carrie Underwood as Maria, who leaves the Abbey and undertakes a self-challenging position as governess for Captain von Trapp’s seven children. Set in Salzburg, a small Austrian city surrounded by the Eastern Alps, I was intrigued to see how this stunning setting would be depicted in televised form. With travel plans postponed at the minute, I thought it would be a nice idea to reminisce and compare my memories of the place which I had visited this time last year.

The story begins in a convent, or Nonnberg Abbey, the location of the famous film production. This is portrayed well in the setting of the musical adaptation through its depiction of traditional features such as long, arched corridors that lead off from a main hall filled with prayer kneelers, along with stained glass windows to match. Admittedly, although I didn’t actually visit the convent on my trip to Salzburg, it is an unmissable feature of the landscape with its standout red dome, sitting underneath Fortress Hohensalzburg. The convent is a main location in the story, the place that Maria not only departs from on her path to self-discovery, but returns to with the von Trapp family when seeking shelter from Nazis. Limited in set choices for their adaptation, by choosing to include this historical site, producers Zadan and Meron thus realize the importance of this setting in the narrative.

Another main backdrop in this adaptation is the snowy mountain peaks, which make Salzburg even more picturesque. Special mention is given to the natural beauty of Salzburg in The Sound of Music soundtrack, particularly the green valleys that are encompassed by the impressive alps, which are sung about in the titular song.

It wouldn’t be a Sound of Music adaptation without paying homage to this unspoilt natural phenomenon. A peaceful, all-encompassing landscape, in Maria’s words, ‘the hills are alive’ as she describes them reverberating her songs back to her. Besides the two dimensional feel of a television adaptation, with the mountains in the background, I also couldn’t help being reminded of my own feeling of connectedness to nature whilst I was there, and the sense of freedom that this wide landscape provides.

Fountains feature frequently in both Salzburg and this version of the play. Located throughout the city in places like Residence Square, perhaps the most well-known are the Pegasus Fountain and the Grand Fountain in the gardens of 16th century Mirabell Palace which the von Trapp children dance around whilst singing Do Re Mi. The garden is famous for its beautifully symmetrical flower beds which I was able to see in bloom, and tried to capture in the below pictures:

The family also sing on the steps in front of the entrance to the Palace grounds. To try and replicate the scene, in the version starring Carrie Underwood, the famous jumping dance sequence takes place on a grand imperial staircase inside Captain von Trapp’s house, which can be recognised as Leopoldskron Palace in Salzburg. Whilst not quite as an impressive backdrop as Mirabell Gardens, the wealth of this salt mining city is still represented in the elaborate-esque interior design of the family estate.

The other historically significant water feature that is seen in The Sound of Music Hollywood film is The Horse Pond on Herbert von Karajan Square. The ornate frescoes on the adjacent walls are paintings of horses which symbolise the purpose of the pond, a place to wash parade horses that were owned by 16th century royalty. Alternatively, the children splash in and sing around the fountain outside the television recreation of Leopoldskron Palace (see second image), paying tribute to the beautiful water spots in Salzburg.

To conclude my reminiscence on Salzburg and The Sound of Music, the closest I got to ‘crisp apple strudels’ and ‘schnitzel with noodles’ on my trip was probably the bircher muesli I had for breakfast, a hearty dish that originates from neighbouring Switzerland. Carrie Underwood sung about these local dishes, and other various assortments that can be typically found in Austria, in My Favourite Things. Evoked not this time through setting but by her beautiful singing, which was accompanied by the equally joyful but less vocally strong von Trapp children, I was taken back to fond memories of my trip.

Dancing in the hills and passing by impressive Austrian buildings was off the cards for this television special. However, the adaptation still managed to capture key moments in the musical and, also as important, the majestic appeal of Salzburg.