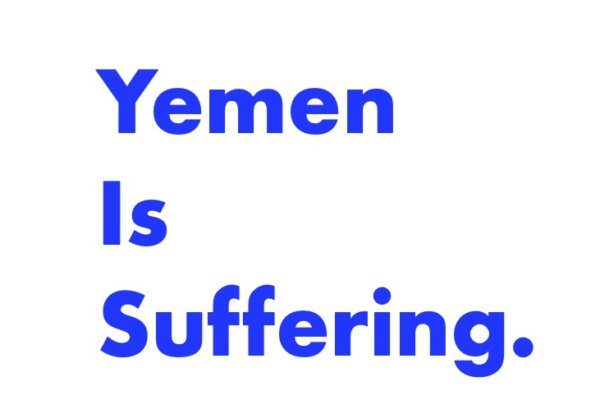 It’s Time To Talk About Yemen

Yemen is currently undergoing one of the worst humanitarian crisis’ in the world and the global media is failing to report it.

Over the past few weeks, we have witnessed the shocking images of hungry, impoverished children, in a war-torn country whose crisis has only been exacerbated by the onset of coronavirus.

To put it simply, 24 million people are suffering.

There are five factors which are currently contributing to the crisis we see today.

Yemen’s civil war began in 2015. There was a political transition between Ali Abdullah Saleh to Abdrabbuh Mansour Hadi. Hadi’s government failed to tackle and acknowledge the multitude of issues and ongoing problems in Yemen, which resulted into a military rebellion. The civil war has resulted in the involvement of neighbouring countries Iran and Saudi Arabia who are on opposing sides of each other. The involvement of these two countries has exacerbated tensions, and resulted in the loss of public infrastructure as well as the displacement and killing of many Yemini civilians.

Prior to the onset of the civil war, Yemen was already one of the most impoverished countries in the world. The involvement of the military, and military powers of Iran and Saudi Arabia has destroyed ports, which has prevented enough food from coming into the country, resulting in a shortage as well as an increase in price of the food that is available.

The civil war is still ongoing.

Both Iran and Saudi Arabia have gotten involved, sending in their respective militaries. There are continuous missile strikes and air raids in the country and there are no signs of stopping.

Yemen’s cholera outbreak began in 2016. Prior to the onset of the civil war, Yemen was already in a fragile position as a result of the droughts and lack of sanitary water. The onset of the conflict has resulted in a lack of food, housing and adequate sanitation. Anything that was available has been destroyed due to the continuous blockades.

The COVID-19 outbreak has exacerbated everything in Yemen. There is a lack of healthcare workers, sanitary stations and testing kits.

Below are a list of organisation, which are striving to support the Yemini population, by providing urgent care and supplies.

UNICEF is a branch of the United Nations. Since the outbreak of the civil war in Yemen they have helped around 4 million children with over 3000 tonnes of lifesaving supplies. They are also providing education to displaced children as well as providing psychosocial support to help them cope with distress and trauma.

You can find out more about UNICEF’s Campaign here.

Save The Children is the largest independent agency in Yemen. They are both working on the ground as well as campaign for the end of the war. They are working to provide the following; health and nutrition, child protection, education and food security and livelihoods.

You can find out more about Save The Children’s campaign here.

Islamic Relief is the world’s largest and leading NGO. They have been working in Yemen for over 20 years. The organisation has provided food to over 2.5 million people and they have equipped 21 hospitals and clinics in order to support the healthcare workers on the frontline. They have also been working to support children through the famine via child protection and psycho-social support activities.

You can find out more about Islamic Relief’s Campaign here.

Human Appeal has been working with Yemen since 2014, and in 2016 set up a country office in Yemen’s capital; Sana’a. They have helped over 900,000 people, via health projects and food aid in order to combat malnutrition.

You can find out more about Human Appeal’s Campaign here.

Alongside donating to organisations in order to provide the vital aid and support on the ground, it is also paramount to lobby for political change.

Write To Your MP

Words are power. Write to your MP (and encourage others to do the same!), in order to pressure the government to lift the blockade, provide humanitarian support, and to stop selling arms to the parties involved.

You can search for your MP’s details here.

There a multitude of amazing petitions online calling for a ceasefire in Yemen as well as long-lasting peace.

You can find some petitions below;

Stop The War and End Famine in Yemen – Change.org

Stop The Flow of Weapons to Yemen – Amnesty

Yemen is currently undergoing one of the worst humanitarian crisis ever. 24 million people are suffering. It is now time to step up and provide a voice to those who need it most.