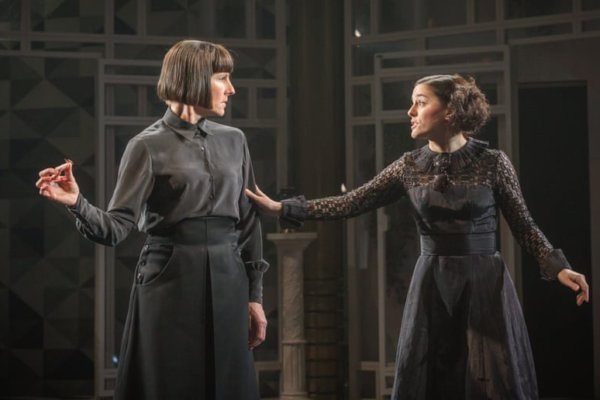 An exploration into modern adaptations of Shakespeare’s ‘Twelfth Night’

Just as Clueless and Easy A are inspirations from classical works, She’s the Man adapts Shakespeare’s comedically genius play Twelfth Night into a modern rom-com starring Amanda Bynes as Viola and Channing Tatum (!) as Duke Orsino. With National Theatre streaming their 2017 adaptation last week, I thought it would be interesting to compare two versions, and their artistic choices, to the original play.

At the heart of Shakespeare’s play sits a complicated love triangle between Viola, Duke Orsino and Olivia. When Viola crash lands onto a mysterious island called Illyria, she disguises herself as Orsino’s page, Cesario, yet she falls in love with him whilst he is in love with Olivia, who instead loves Cesario. Confused yet? This play is packed full of characters with false and mistaken identities which is what makes this play so complex yet exciting to follow. With a dark comic sub-plot that is choreographed by Olivia’s household, this is a play that also explores the dangers of disguise and secrecy.

Simon Godwin (National Theatre) inventively presents his version of Twelfth Night on a revolving stage with a pyramidal structure in the middle. We first see the structure folded up which likens it to the front of a ship. The dark lighting and sound effects of thunder perfectly encapsulate the opening of the play when Viola is shipwrecked onto Illyria.

The main setting of the play, Olivia’s household, is cleverly conveyed by wooden framing which portrays the internal structure of a house. This basic structure is also useful for the cut outs in the wood give the impression of window frames. They are even brightly lit up in the shape of a cross during a wedding scene as is a traditional ending of Shakespearean comedies!

In contrast, She’s the Man is an American teen movie that is set at a boarding school, aptly named Illyria. After being kicked off Cornwall High’s soccer team for girls, Viola pretends to be her twin brother, Sebastian, so that she can join Illyria’s boys’ team. The school setting is a good alternative to an island. It allows for an exploration into Olivia and Viola’s relationship, when they become lab partners in science class, and an even wider exploration into friendships and relationships within this social context.

Hats off to Soutra Gilmour with National Theatre for designing brilliantly colour-coordinated outfits. They serve a practical function in this play about multiple identities, making the characterisation of Viola and her brother as twins clear as they wear matching white shirts and black trousers. They provide a laugh too.

In the original script when Malvoli(a) is tricked into wearing bright yellow stockings, the costume team finishes her outfit off with a wide white cape and tutu. This makes her look even more ridiculous which is then made more effective by the fact that Tamsin Greig maintains focus on her performance, even though she is also wearing what director Simon Godwin describes as ‘helicopters on her nipples’. This play is a must see for the outfits alone!

In She’s the Man, Viola undergoes a classic teen movie makeover (who else loves scenes like this?) when she pretends to be her brother. With a new wig, swagger and deep, manly voice, ‘I’m a badass hunky dude!’, Bynes’ attempt at being seen as a boy is quite funny. Indeed, this adaptation swaps Shakespearean puns for modern day humour, for example when Duke and his friends find Viola’s tampons, which then makes Viola (Sebastian) demonstrate that he uses them for his nosebleeds… Not all of the actors manage to succeed in being funny, but Malvolio being characterised as Feste’s spider is hard not to laugh at (sorry Malvolio!).

Clothes play an important part in Twelfth Night for representing the theme of disguise. Both adaptations use bathing and its implications on clothing and dresswear as a vehicle for discussing gender. Godwin cleverly chooses to set act 3.1 in Olivia’s house in a room with an indoor pool. It provides scope in the performance for Olivia to be dressed in a revealing swimsuit and Cesario to awkwardly wonder how to avoid dressing into gold, ahem, budgie smugglers. Similarly, Viola’s difficulty in maintaining her false identity is portrayed in the film version when she narrowly avoids shower scenes and changes her clothes too.

In She’s the Man, the most effective exploration of the themes of gender and behaviour is a dream sequence of Viola losing the all-important soccer match whilst wearing a ball gown. It portrays her fear of not being taken seriously as a female player on a male team, asking the audience to question how we expect people to adhere to ‘gender norms’ without allowing the opportunity to be freely expressive.

Overall, these adaptations are an original yet traditional take on Twelfth Night, set/staged in contemporary times. Whilst She’s the Man modifies the humour for a teen audience, it is National Theatre’s unique stage and costume designs that most effectively revitalize the 17th century play.

Unfortunately, National Theatre is no longer streaming Twelfth Night on YouTube, but watch out for their other theatre performances every Thursday!