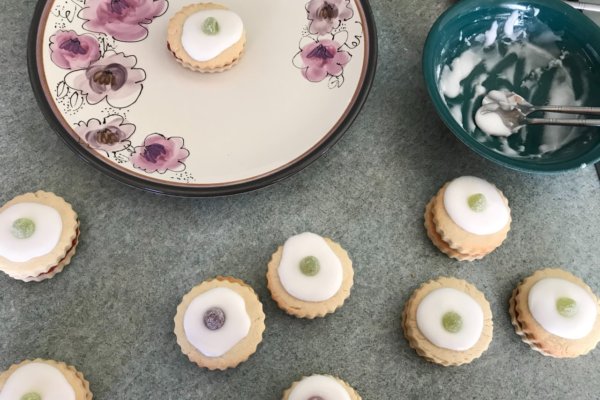 Start spreadin’ the jam: / I’m baking today! / Those stay-at-home blues / Are meltin’ away…

Stay in, get your bake on, and whip up a batch of these two-tier, jelly tot-topped marvels.

These (slightly non-PC-titled) snacks are a stalwart of every good Scottish bakery’s shop window. They feature a duo of fluted shortbread spheres, double-deckered via a slathering of berry jam, and are topped with a jelly tot set in a puddle of water icing. Cousin of the Austrian ‘Linzer biscuit,’ they were known as ‘German biscuits’ until the First World War and anti-Teutonic sentiment forced a rebranding. In an exercise of patriotic pride, enter, post-1914, the ‘Empire biscuit.’ Nowadays, perhaps ‘Commonwealth biscuit’ would be a little less contentious. But what’s in a name? The biscuit by any other name would still taste as sweet…

When life gives you lemons… Try replacing the jam with lemon curd, topping instead with candied citrus slices. Just the zest!

Yummy and gummy! Jelly tots can also be replaced by whatever jellied sweet takes your fancy. Dare to bear with a gelatine ursine, or have a yolk with a fried egg.

Loco for cocoa? Substitute 50 g. of the flour for cocoa powder, and stud each biscuit buttie with a chocolate button.