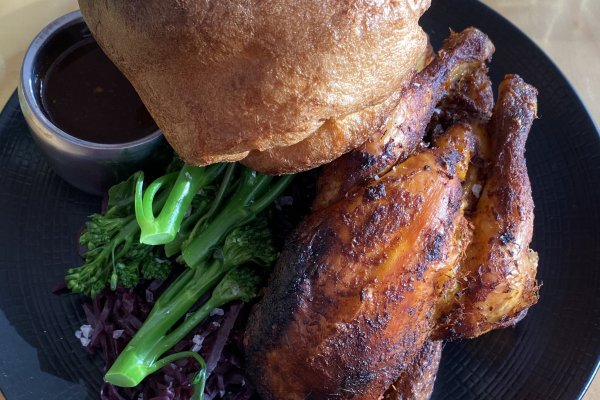 Best Places to go to for a Sunday Roast in Liverpool

LGSM Food and Drink writer, Nisha Paris, went on a quest to find the best roast in Liverpool.

If you want somewhere to go for a roast, here are all the places that I would recommend, because these restaurant roasts are truly phenomenal!

Located just behind ‘The Florist’, The Buyer’s Club does an excellent roast where the roast potatoes are to die for! When inside, the vibe is like you are sitting at a cocktail bar in Chelsea, and is filled with plotted plants.

There were different variations of roasts you could get which were the beef, chicken or if you were vegetarian, you could get the nut-roast. They all cost £12.50 served with all the trimmings. Which included parsnip puree, carrots, red cabbage and tenderstem broccoli.

Below, you can see the nut-roast, which one of my friends had because he is a vegetarian. However, myself and my other two friends had the beef roast.

Above is the beef roast which came with a massive Yorkshire pudding which was really fluffy, and a nice piece of beef surrounded by ‘the trimmings’. The potatoes were really nice to eat as they were so crispy on the outside, but so fluffy inside. The beef was really succulent as there was no issue with cutting into it. Altogether, I would give this meal a 4/5 as even though the meal was excellent, I felt that I couldn’t finish this meal due to the parsnip puree being covered on the majority of the items.

When it was time to pay, they said that they did not do a student discount, which is a shame. But if you want to venture down to eat a meal from the Buyer’s Club, this is how to get in touch with them.

I next went to Slims which replaced Love Thy Neighbour, which is located on Bold Street. The vibe was very Americanised due to it being an American diner which sold cocktails, milkshakes and typical American burgers and waffles.

Again, like The Buyer’s Club, they served three different roasts with the trimmings, however due to it being American, they served roast beef brisket, chicken poussin or grilled seitan for all the vegetarian eaters out there. The meals were £14.95 each and came with all the trimmings, including a Yorkshire pudding, tenderstem broccoli and red cabbage.

I wanted to try the chicken roast purely because I had already had a beef roast, and wanted to compare them both.

This was my favourite roast I had because the chicken’s seasoning was like no other I had tried before. The seasoning included a mixture of paprika, salt and pepper and brown sugar. Let me tell you, this was an absolute delight, as the chicken was neither too sweet or spicy. It was spectacularly perfect. The combination of all the trimmings combined with the chicken makes my mouth water just writing this! I feel like I need to eat another one, shame they only do roasts on a Sunday. I definitely recommend this roast, because the Yorkshire pudding was very fluffy and the roast potatoes were something else.

I rate this meal a 5/5 because everything was just too good to be true.

At One Fine Roast, you can either order the roast sirloin beef, the home-made nut-roast or the butter roast free range chicken. The chicken was delicious and very succulent.

The meal comes with trimmings such as tenderstem broccoli, roast potatoes, carrots, turnip puree and gravy. Not the type of gravy that’s thin and has no flavouring, but ‘proper gravy’ combining all the rich flavours together. The roast also had a tower of Yorkshires on the side of the dish, so that true Yorkshire pudding fans did not have to go without, the restaurant made sure you could pile on as many Yorkshire puddings as you wanted! Furthermore, the sides were an additional £4 each, but due to the fact you got so much on your plate, I thought this was a good idea to skip.

If you would want to go down to One Fine Day to get a taste of their roasts, here is the information you need!

We of course get to our final restaurant which served another spectacular roast, which was located on Hope Street.

This roast chicken came with a pork and sage stuffing which was something completely different that I hadn’t experienced with the other roasts before. The roast also came with a Yorkshire pudding, roast potatoes, sweet potato mash and some broccoli. If you want a traditional roast chicken then this is definitely the place for you and for only £12.00, it’s definitely worth the splurge.

Unfortunately, Fredrick’s do not do a student discount, but if you want a traditional meal that looks like it’s been homemade, head down to Hope Street!