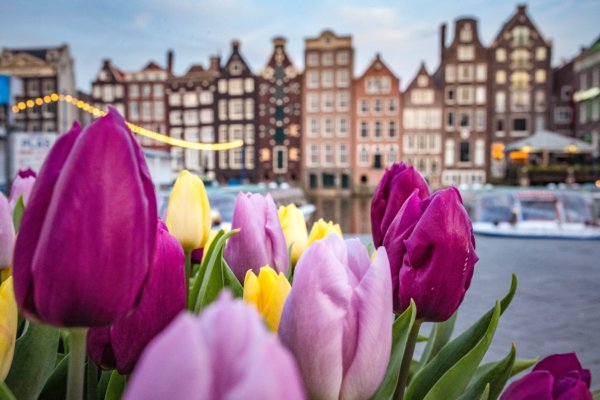 Amsterdam has so much more to offer other than smoking weed and gawking at the women working in the Red-Light District. This article is an opinion piece by Dutch native Emma Oudheusden, a current member of the society, concerning how to be a better tourist in Amsterdam, followed by some ideas from Zoë Cashman as to where to go to avoid the beaten path and experience the city like a local.

A couple of weeks ago Zoë told me about her plans to travel to Amsterdam. Considering that I was born and bred there, she asked for some tips on what to see and do other than the main tourist attractions in order to get a proper feel of the city and its citizens. I really liked her approach to her visit, for tourists often forget about the locals living in city destinations.

On average, there are a million trips to Amsterdam made by the British each year. Due to cheap easyJet flights with short journeys (50 minutes if you’re lucky), as well as the direct Eurostar from London, Amsterdam remains a popular destination for many a tourist.

However, although there are plenty of tourists that indulge in Amsterdam’s culture, most use their weekend as a ‘piss-up’, or to smoke as much weed as they can in a range of 48 hours. Believe it or not, the locals are rather tired of the tourists who occasionally tend to forget that they’re visiting a city with actual people living in it.

Being an ‘Amsterdammer’ myself, I can agree that these tourists tend to get on our nerves a bit (I have seen people vomit on the streets too many times to count). Of course, annoying tourists are not exclusive to Amsterdam, and we ourselves can be pretty irritating on holidays, I admit.

I should point out that I’m not trying to hate on tourists in Amsterdam; they boost the self-esteem of our city and are a great source of income for local businesses as well. However, I do think that in our contemporary Western world, where ‘city breaks’ are a valid type of holiday, it might be wise to reconsider ourselves as tourists.

How Can We Be Better Tourists?

‘Popping over’ to another European city is so common nowadays, due to cheap travel prices and less time off in work. I myself have done it a lot, because why not? Well, aside from the massive negative impacts these trips have on our climate, I think they have also made us less aware of the cities we visit. We go, we see, and we leave again.

Although these city breaks have opened up a world of exciting possibilities, the question remains whether you can really get to know a city in such a short period of time. We focus too much on the specific ‘instagrammable’ places we want to see but forget about the citizens that create the atmosphere of a city or place. If we were to take away the locals, a city would lose its spirit.

I think we need to place our focus on the locals when we visit a new city – if we start fully immersing ourselves into different societies, we’d return home feeling that we’d not only seen that what a place has to offer, but also a full view of its culture and traditions.

Rather than focussing on all that we shouldn’t do as tourists, it seems better to focus on all that we can do, in order to make our trips a bit more extensive and more respectful to the locals of the cities we go and see. My main plea therefore is not to never do city-trips anymore, but rather to realise that when you visit a place for a couple of days, it is a brief period out of your life, but others have to constantly live in that place.

Although it is good to consider these things wherever in the world you go, below are Zoë’s tips that will help you enjoy Amsterdam like a bit more of a local (don’t worry, there are still plenty of touristy things that you can do that are also very fun). Hopefully you’ll enjoy it – but please don’t throw up on the streets!

18 Things to Do in Amsterdam

If you are like me, and the thought of jumping on a plane makes you feel a bit queasy, the new direct Eurostar train from London to Amsterdam makes the thought of travel that little bit easier. Whilst planning my own first trip to Amsterdam, and after consulting Emma who is a native to the Netherlands, I have devised a little list of the top things to do and see in Amsterdam that are both main attractions and a bit more off the beaten path.

Wander around the Albert Cuyp-markt

Where Anne Frank hid and wrote her diary during the Second World War. A popular destination for tourists, but as a History student I couldn’t resist putting it on the list!

Check out the Fashion for Good Museum

The first museum in the world devoted to sustainable fashion, which also runs workshops on how to make the future of fashion environmentally friendly.

Take a walk around Haarlemmerdijk

A street at the start of Amsterdam’s four main canals. Haarlemmerdijk is less touristy than the main canals, and full of cute shops and places to eat and smoke weed if you fancy it.

Give the environment a bit of a break and hire a bike to explore the accessible city. However, don’t try to cycle around the busy canals unless you know them, or you might get shouted at by locals! The outskirts of the city are apparently best for cycling as a tourist.

I always love trying traditional food when travelling, and in Amsterdam you can find the combination of raw herring, onion and gherkins. It’s like a Dutch Marmite; you either love it or you hate it.

From the Van Gogh Museum to the traditional art styles in the Rijksmuseum, there is plenty of culture to be seen in Amsterdam. However, I’ve been told to avoid the Moco Museum – despite boasting Banksy and Warhol artworks, apparently it isn’t legitimate!

Take a walk through the canals

There is over a hundred kilometers worth of canals to explore in Amsterdam, including the main trio of the Keizersgracht, Herengracht and Prinsengracht.

A lovely park to explore, and you can visit a cinema there as well! It is also nearby to a restaurant called Pacific Parc, where on a Friday it turns into a mini club where the local customers get up and have a dance.

A great place to eat, drink beer and beat your friends at Mario Kart!

Catch a film at the Eye fimmuseum

Located on the other side of the river ‘t IJ (just a short, free ferry trip across the river), this museum is great if you like cool architecture and foreign films – which occasionally have English subtitles.

Founded in 1638, it’s one of the oldest botanical gardens in the world! The plants were originally collected and used by apothecaries in medicine, but now the gardens are available to visit by tourists.

If you’re interested in historical erotica and the evolution of sex and sexuality, this is the place for you!

Grab a bite at Pllek

A restaurant and bar where you can sit outside and get one of the best views of Amsterdam, and they also start playing music later on in the evening!

Take a trip on the river

Whether you’re more of a boat or a pedalo person, exploring Amsterdam’s expansive canal systems is a must.

One of the most popular squares in Amsterdam, and the location of the Royal Palace, Madame Tussauds, Hotel Krasnapolsky, the National Monument commemorating victims of the Second World War, and the New Church which sometimes hosts exhibitions.

Learn about the Red-Light District

Instead of visiting, try learning about Amsterdam’s liberal past in different ways. Mass tourism in the red-light district actually has a negative impact on the lives of the workers who inhabit it, as it can cause actual customers to stop going out of embarrassment. However, if you are keen to see what the district is like, be as respectful as possible to the people who live and work there – don’t take photos, shout or gesture at those in the windows.

Have a pint at the Heineken Experience

A venue which has provided many students with a good night out. If you want to have a less touristy experience, go to Brouwerij ‘t IJ in the east of Amsterdam, where the brewery is located in a windmill and produces craft beers.

Be sure to check http://iamsterdam.com/en  before or during your travel – a website for locals as well as for tourists. There might be some interesting (free) events on whilst you’re in the city!