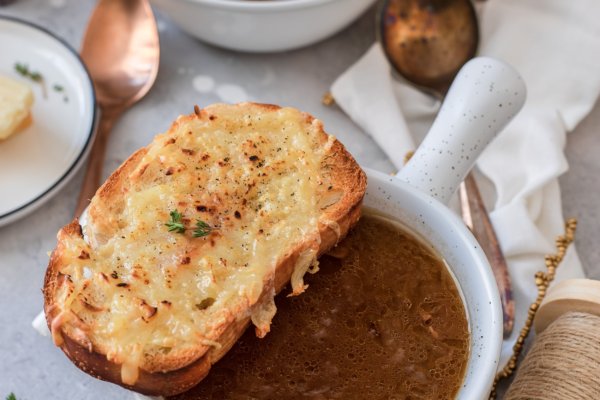 Seven simple soup recipes that will fill your belly, but won’t empty your piggy bank.

Soup is a dish of the peoples. It doesn’t require meticulous, Bake Off-style weighing; after all, it is supposed to ‘look like soup.’ It won’t demand a fridge full of ingredients, or an afternoon free from plans. It is low-cost, and low-maintenance. It will just sit there in its bowl, steaming, the strong and silent type, ready to warm both belly and heart.

Below, we’ve compiled a selection of straightforward, six-step recipes for soups from around the world- dishes from the Steppes to the souks. Simply slice, splash, stir, simmer, spoon, serve – and slurp!

NB. Quantities as listed below will produce enough for 4 portions, so you can opt for sharing and caring… or alternatively, go selfish: how about stockpiling and smiling when you realise there’s a readymade solution to those midweek munchies.

Otherwise known as borscht, this soup originated among the Ukrainian peasantry in the 1500s. Its sweet, sour and smoky flavour profile meant that its popularity soon spread; Empress Catherine the Great declared it ‘her favourite meal’ and employed a dedicated chef at the Winter Palace to prepare it for her. Elsewhere, it is said to have spurned a mutiny onboard the ship Potemkin, whose unfortunate captain found the message ‘Dead for a spoonful of soup’ scrawled on his corpse. This recipe may not be rabble-rousing, but it still tastes delicious, and tallies up at a cost-per-bowl that even a Slavic serf could afford. Na zdorov’ya! Budmo!

Slice the carrots and onions, shred the cabbage, dice the potatoes; on a separate chopping board, cut the beetroot into small cubes and finely chop the dill.

Splash three pint glasses full of boiling water into a large saucepan, and crumble in the stock cubes, then add everything on Chopping Board One (carrot, onion, cabbage, potato) to the mix.

Simmer for 40 minutes, or until all your veg are tender when pierced with a fork.

Stir in the ingredients from Chopping Board Two (the patiently waiting beetroot-and-dill duo), along with the tablespoons of sugar and vinegar. Leave gently bubbling for a further 5 minutes or so (while you see to the drool gathering on your chin).

Spoon into bowls, seasoning with salt and pepper to taste.

A case of ‘Make Do and Blend,’ this soup uses up all your foodie leftovers, meaning less money spent and less unnecessary waste. Greta Thunberg would be proud!

Slice the onion, then juice and zest the lemon.

Splash the equivalent of two pint glasses of boiling water into a large saucepan, crumble in the stock cubes, and add your newly-chopped onion plus your big bag o’scraps. Tear in the bread at this point, too- by some unknown process of carb alchemy, just this single slice will later lend a creamy texture to the entire soup.

Simmer until the assorted veg have disintegrated; this will generally take between one and two hours (Netflix interlude, anyone?).

Stir in the seasoning and chilli flakes, along with any extra salt and pepper, to taste. This can either be done using a stick blender, or by decanting into a smoothie making contraption- whatever’s at hand.

Spoon into bowls and slurp away!

Serve topped with a generous dollop of cooling Greek yoghurt. (A must for the korma class of consumer- this soup is a little fiery!)

Adapted from Time to Eat, by Nadiya Hussain.

Essentially, a bowl of bruschetta; what could be better? Bellissima!

Slice (for the ladylike, or tear for the not) the bread slices.

Splash the tinned tomatoes into a large saucepan, along with two more tins’ worth of boiled water. Now add both the seasoning and the bread.

Simmer for around 10 minutes.

Stir in grated Parmesan, salt and pepper, to taste.

Spoon into your bowl of choice, and savour.

Serve with a drizzling of extra-virgin olive oil, and an extra sprinkling of Parmesan, if ripe feet are your forte.

Adapted from 5 Ingredients, by Jamie Oliver.

This recipe incorporates two (of the best) elements of a traditional English breakfast- baked beans and sausages- into a soup. Unlike the original, though, this guilty pleasure in liquid form won’t leave you with a greasy (soup)spoon: it involves only 2 tablespoons of oil. What’s more, it’s ridiculously inexpensive, weighing in at a mere 75 pence per bowl.

Slice, then dice, the onion, and fry it in a large saucepan until softened and translucent.

Splash in the beans, and add another tin and a half’s worth of boiling water to the pan. Add the pasta shapes at this point too, and crumble in the stock cubes.

Simmer over a medium heat while you cook your sausages (bake, grill, or fry until crisp), then slice them into pound coin-shaped rounds.

Stir the sausages, and a dash of the unpronounceable Worcester sauce, into the saucepan. Leave to bubble away for a further 2 minutes or so.

Spoon into bowls, seasoning with salt and (liberally) with pepper, then chow on down!

(Serve with a slight hangover- optional.)

Adapted from Nosh for Students: A Fun Student Cookbook, by Joy May.

When Mister Bruno Mars settles down to a simple supper of soup, you can bet this is the sort he likes: it’s (twenty) four carrot magic. Ginger-zesty and cumin-heady, plus a colour to make an Oompa Loompa’s fake tan specialist cry with envy. It’s Amazing Just the Way It Is, but even better with slices of golden-crusted French baguette.

Slice the carrot into finger-width batons (no need to peel). Grate the ginger root.

Splash the oil into a large saucepan, and fry the grated ginger until it begins to soften.

Stir in the remaining spices, followed by the carrot batons, mixing well to coat them in the pan’s fragrant contents. At this point, too, add the (crumbled) stock cube along with a pint glass-worth of boiling water.

Simmer until the carrots are tender when forked (around an hour or so).

Blitz the broth (see instructions in Recipe 2), until silky and smooth.

Spoon into bowls, control your excitement as you season to taste, then tuck in.

Harira, as the natives know it, is Morocco’s national dish. Traditionally, it’s served as part of a celebratory banquet, and for good reason: it’s filling, gloriously fragrant, and faff-free to make.

Slice the celery; dice the onion, carrots and potatoes; grate the ginger.

Splash the tin of tomatoes, the drained chickpeas, as well as 1 and 1/2 pint glasses of boiling water into a large saucepan.

Simmer, mixing from time to time, for anywhere between 1 and 2 hours- the longer it is left, the more the flavours will infuse, and the headier the aromatic fug in your kitchen will become.

Spoon into bowls, season to taste, then devour like there’s no-one watching (in fairness, they are in all likelihood distracted by your fez anyway).

Serve with grill-toasted pitta pockets for mopping up those last, mouthwatering morsels.

So-called because, an hour after minimal prepwork, you’ll have a big bowl of Indian-inspired loveliness- the most strenuous thing you have to do is mix!

Slice– well, everything that can be, i.e. the chillies, butternut squash, sweet potatoes and onion.

Splash the contents of the tin duo (coconut milk and tomatoes) into a large saucepan, along with a pint glass-worth of boiling water. Add to this the veg.

Stir in the spice mix and crumble in the stock cube.

Simmer for an hour, stirring occasionally, until even the largest of the veggie chunks are soft, and the surrounding broth is velvety and a vivid orange-gold.

Spoon into bowls, season, and prepare for soup nirvana.

Serve with the usual accompaniments- naan bread, poppadoms, discordant sitar music. Try squeezing over the juice of half a lime for some added zing.

Adapted from At My Table, by Nigella Lawson.