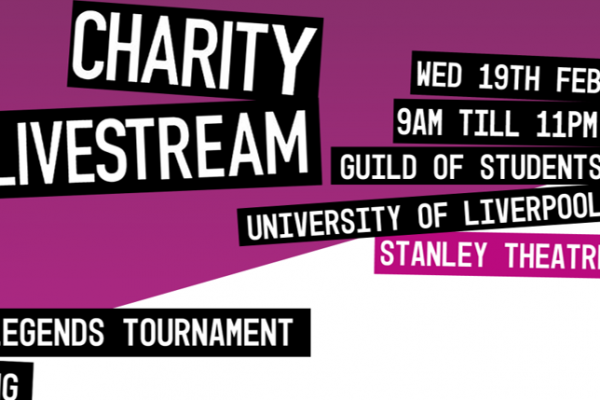 I sat down with Jack and Ellen from Gaming Society to discuss their upcoming charity event, here’s what they had to say.

So guys, can you give me a rough outline of the event, what kinds of things can people expect when they arrive?

We’ll have twelve laptops set up with a series of games on them that people can drop in and play on with their friends or on their own. The idea is during the day, people can drop in between lectures, and there’ll be Smash Bros, Mario Kart (on Switch, I checked), and a VR headset. Baking Society will be having a bake sale around lunch time, and in the evening we’ve got a pub quiz planned.

“We just want everyone to have a good time, play some games, and make money for charity.”

And which charity is it that you’re raising money for?

It’s called Clic Sergeant, specifically their Players vs Cancer initiative. They bring equipment like video games into hospitals, including Alder Hey in West Liverpool, and give them to kids who are going through cancer treatment to give them a distraction, like while they’re getting chemo.

Ah nice, so what can students do to get involved on the day?

Everyone is welcome to join in on the pub quiz, which will be starting at about 9 pm, and we’ll be live-streaming the whole event so people can watch on that throughout the day and make donations. There’s going to be pizza too, and we’ve got an event for that on the Guild website so people can register their interest and we’ll know how much to order. The tickets are free but a donations of £3 or £4 to cover the costs of the pizza would be greatly appreciated.

They’ll be different tournaments running throughout the day that people can drop in to join in on, and Hope, Edge Hill, and John Moores will be coming along for some varsity eSports, so people can come support the Uni of team.

We’re organising for some of our members to do some speed-running, some of them have done it before, and some are new to it and getting some practice in before the big day, and it would be great if some people could come down and support them.

After the event, if people want to get involved in Gaming Society, how can they do that?

Well, we have meet-ups every Friday in the 502 that are open to anyone. We get a lot of people who think everyone in the society are like competitive gamers, but it’s open to casual players too, we mostly play Mario Kart. We also have a discord server (discord.gg/uolgamingsoc) that people can join, and that’s what people talk on so you can find people who play the same games and make new friends.

Of course, events like this take a lot of manpower, is there anyone you want to give a shout-out to?

Tor and Emma from the Guild have been incredible help for the event. Tor has been nothing but dutiful and an amazing help, and Emma knows everything about organising a charity fundraising event that it wouldn’t be possible to organise this without, especially because this isn’t really a standard event. And of course Baking Soc for doing the bake sale, and the new Photography Society and Liverpool Guild Student Media for covering the event.

Gaming Society’s charity livestream will take place on Wednesday 19th February in the Stanley Theatre from 9am till 11pm. You can register your interest in the pizza and quiz in the evening here.

You can watch the video of the interview here.

Twitter: @UoLGamingSoc
Facebook: facebook.com/groups/uolgamingsociety
Twitch: www.twitch.tv/uolarcticfoxes/ (where you can watch the livestream of the event and donate!)