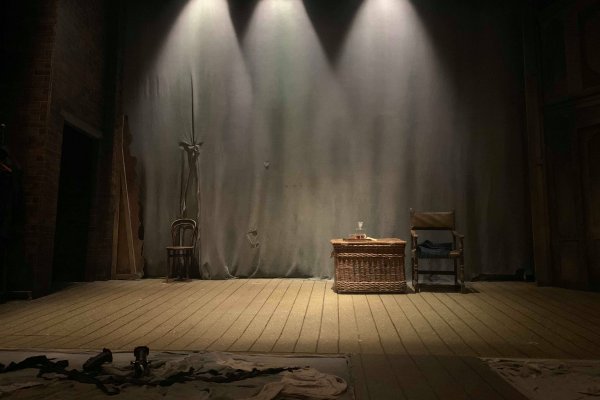 The Woman in Black – Theatre Review

As someone who is frightened by their own reflection after a night at the Raz, it was maybe not the brightest idea to visit the Playhouse on a dark, wintry night for an evening of ghoulie ghost tales. Susan Hill’s 1983 novel, The Woman in Black, was adapted for stage on the West-End 30 years ago, and after James Watkins’ 2012 film adaptation, has experienced a resurgence in popularity. Now entering its third decade, Stephen Mallatratt’s stage adaptation of The Woman in Black has been critically acclaimed as “A masterpiece” and “one of British theatre’s scariest hits” (The Guardian) and is set to haunt Liverpool’s Playhouse until the 1st February.

A Tale of Boy Meets Ghoul

If there’s one thing more terrifying than watching a scary film, it’s watching the same scary story but in real life and on stage. Knowing that a horror villain no longer exists behind a screen, but tangibly instead, is what fills an unexpecting audience with apprehension. Nervous chatter begins to hang above the audience like a sea-fret above the Nine-Lives Causeway and the seats point towards a weathered set consisting of a chair and a clothes rail, both covered by dust sheets. A suspiciously threadbare grey sheet hangs limp behind, and the audience sit at the foot of a sloping wooden floor, as though beneath the earth and watching from the grave. As the lights dim, an elderly Arthur Kipps (Robert Goodale) shuffles into view, a wad of papers gripped in his trembling hand as he begins to read.

“It was nine-thirty on Christmas Eve…”

After a sheepishly painful reading (or six) of the passage that begins Susan Hill’s novel, ‘The Actor’ (Daniel Easton), hollers at Kipps from the back of the theatre, walking down the centre aisle that the ghost of Jennet Humfrye will walk down too.

In the two-hand-only adaptation, the pair begin by comically interacting with each other and with the wad of papers that resembles a manuscript for a potential play. What is written on the papers is Arthur Kipps’ desperation to share his experiences at Eel Marsh House which leads towards a meta-theatrical storytelling. In ‘The Actor’s’ visualisation of the manuscript, he allocates ‘Kipps’ with the roles of every other character besides his own, leaving the role of Arthur Kipps to be played by ‘The Actor’. Goodale performs characters that his ‘real’ character once encountered on his journey to the house such as Keckwick and Mr Jerome, adopting a range of believable accents and physical characteristics.

Casting a Shadow (or three)

The conflict between ‘reality’ and ‘performance’ within the realms of the stage is made distinctive by changes in lighting and a distinct change in characterisation of the actors on stage. The use of lighting is what also provides a prominent source of tension through the creeping of shadows and ambiguous figures, all of which can be mistaken for the Woman in Black herself. The plain backdrop serves both as a canvas for shadows to be projected onto, and as a semi-permeable screen which gives the illusion of different rooms in the house. It drapes behind a minimalistic set that becomes more populated with props (or propulated?) as the story becomes more elaborately decorated.

Gradually growing shadows accompany long periods of silence, leading the audience into an unsettled state of apprehension and giggles of nervousness. Simply using light and darkness to increase expectations of the audience builds a tense atmosphere that is infrequently released through startling appearances of the ghost. When these appearances eventually do come, they result in a sea of gasps from the audience and then followed by expulsions of hysterical laughter.

Mallatratt’s adaptation does not succumb to the expectation of easy fear-factor tropes of horror such as recurrent jump scares. When the jumps do come, they are brief and sparse, releasing tension, but not too much. It is, in fact, the Woman in Black’s absence that is more suggestive of haunting than her physical presence on stage (especially since the movements of the Woman in Black herself were anticlimactically and comically speedy). Knowing that an unseen spectre has only just left a place that the audience is currently focused towards becomes a much more effective method of prescribing terror than allowing her to be seen too frequently. For example, in a scene where her son’s bedroom is left wrecked with clothes frantically strewn across the furniture, it is the suggestion of the Woman in Black’s fleeting presence which builds more tension than a vision of herself would.

Perhaps the earlier-used phrase of ‘villain’ is too strong for the ghost of Jennet Humfrye. Her character embodies solitude and rejection and the background of this is explored adequately throughout the course of the performance. Instilling a little bit of sympathy for the Woman in Black develops an additional layer of empathy to the plot (and hopefully prevents her from selecting you as her next victim).

Tickets for the remaining shows are available via this link.