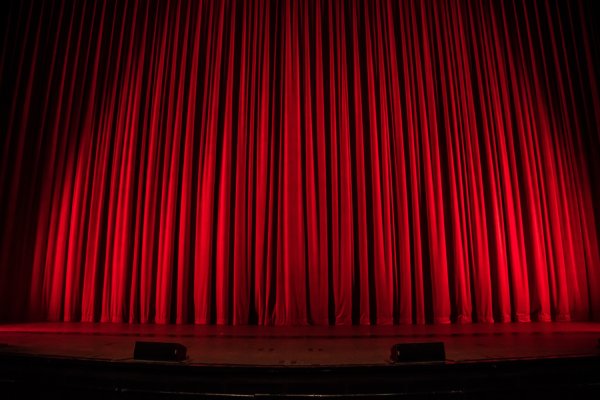 If you liked The Play That Goes Wrong, you’ll love Curtains.

With the classic structure of a whodunit, Curtains follows the story of a theatre company putting on a musical, but on opening night their female lead is murdered. Cue homicide detective Frank Cioffi (Jason Manford), who also happens to be a huge musical theatre fan. By the end of the show Frank manages to not only to solve the crime, but also to save the show, and he might even fall in love along the way.

Along with Manford, Ore Oduba (best known for his time on This Morning and The One Show and a past winner of Strictly Come Dancing) and Carley Stenson (who played Steph Cunningham in Hollyoaks and also Lucy Parker in Holby City) will be familiar names to most of the audience. All have theater experience that has served them well, and they are delightful to watch on stage. In spite of these big names, the show was very much stolen by Rebecca Lock, who plays Carmen Bernstein, the producer of the show. She manages to dance in one of the most restricting skirts I have ever seen as a costume, and her powerful voice is always easy to pick out in group numbers and delightful to enjoy during her solos.

The show contains a barrage of theatre puns, and a few meta quips to the audience, including an entire song specifically aimed at theatre critics, which I’ve decided to see as a shout-out and nothing more. At times, the writers utilise black comedy to fit the more sinister plot of the show, or occasionally move to more raunchy humour, but the deadpan tone never fails to result in a laugh out loud moment for the audience.

The divide between songs the actual characters are singing to each other and songs they are performing as part of the musical they’re putting on can feel wide at times. Although, part of the improvements to the show is the continuous rewriting of one of the songs, ‘In the Same Boat’ as suggested by Cioffi, so the earlier versions need to feel slightly off the mark to allow room for improvement. The music and book is from the pair behind Chicago and Cabaret, Kander and Ebb, so the jazz age veneer and satirical witticisms feel effortless.

‘Curtains’ will be running at the Empire until 1st February 2020 and you can get tickets via the ATG website here.