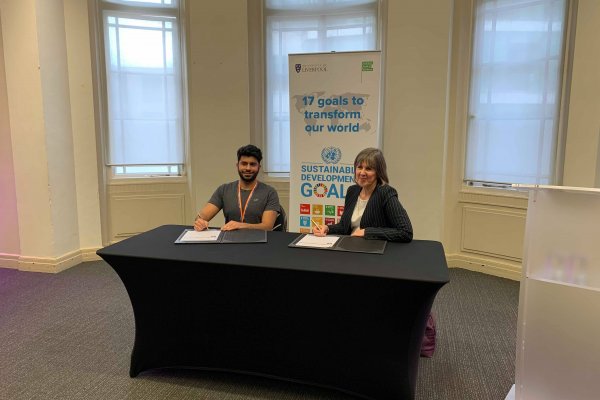 The Vice Chancellor, Professor Dame Janet Beer, and Adnan Hussain, our Guild President, both signed the UN’s Sustainable Development Goals (SDG) Accord. By signing it, both have committed to upholding the 17 SDGs the UN has laid out, including ensuring access to sustainable energy and taking urgent action to combat climate change. You can read the full list of goals here.

“We are facing a climate emergency…”

In order to try and achieve the 17 goals the UN created in 2015, the University has updated its values and ethics standards, as well as creating six new sustainability sub-groups to set out programmes of work, including groups for biodiversity, climate, culture and communication.

“… But the University can help”

Role of Students in contributing to SDG achievement

The University recognised the role of students in the task, with Guild President Adnan Hussain also signing the accord on behalf of students. In his speech, he pointed out the important role young people have already played in the climate emergency, specifically within the Guild with the campaign to end the University’s investment in fossil fuels, led by Hannah Nguyen, Guild Vice President.

In her speech, Beer outlined the steps the University is taking in order to combat climate change. The University recently opened their Centre of Excellence for Sustainable Food Systems (CESFS), which combines academics and their various contacts across the world to research and crop sciences, genomics, and various other disciplines, in order to support sustainable food systems and improve human health through what we eat.

Keep a lookout for Liverpool Guild Student Media’s first investigative documentary, How Green is the Guild?, on our Youtube page.