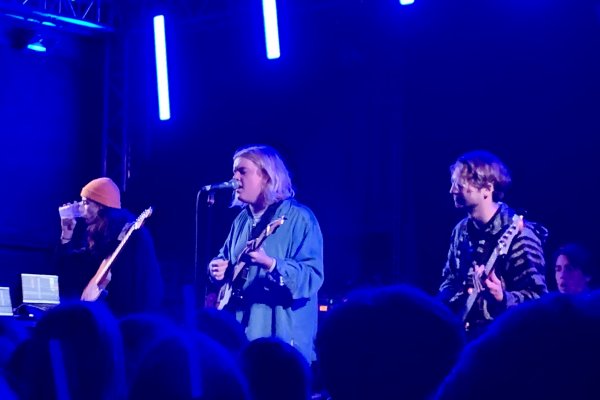 Liverpool has always been a city that celebrates the rise of upcoming artists, so it’s no surprise that the arts club was packed last December, with masses of fans coming to see the early anticipated ‘Dirty Hit Tour’, set up by the 1975’s record label of the same name. These shows promised to showcase the best young stars who were quickly making a name for themselves under the label, with indie-pop favourites Oscar Lang, No Rome and Beabadoobe, making up the setlist.

As crowds waited for the beloved artists to make their entrance excitement slowly built up in the room, resulting in a thunderous applause when the first act, Oscar Lang took to the stage. The frenzied excitement of the crowd was testament to how beloved these young artists truly were, and served as the perfect beginning to a night of exciting new acts.

The first of the group to take to the stage was Oscar Lang, who seemed to really relish in the crowds enthusiasm, dancing around the stage with his band, the ‘Lang Gang’, as he started his first track.

Lang mostly played new music, making the less easy for the audience to give the same reaction to the beloved favorites scattered throughout the setlist. However, this didn’t stop Lang connecting with the audience. His easy-going charm on stage, making him feel more like a friend throughout his set than an artist on the rise, and encouraging the audience to dance and scream to tracks they knew, and the ones they didn’t.

The audience’s enthusiasm remained throughout some of softer acoustic tracks, such as the heartbreaking song ‘you’. These tracks were filled with an almost brutal honesty that resonating with the crowd, who swayed with the sound of Langs raw, yet impressive vocals. However, Lang was sure to end the night on a high, playing his set out with in his song ‘Underwater Trees’, an undeniable bop. It was here Lang told everyone to get on the ground, only to jump back up in a wild frenzy when the last chorus.

Personal touches like this was what took the set from good to great, and in collaboration with the stellar music itself, helped turn the Langs set into what felt like a celebration between friends, than just a regular gig.

No Rome took to the stage next, with the crowd as enthusiastic as ever after Lang’s warm up. It was a tough act to follow however, No Rome, also known as Guendoline Rome Viray Gomez, did not seem phased, his chilled persona matching with his laid-back beat heavy tracks.

The more synth heavy, electric tracks allowed for some flashy vocal effects, that added to the already impressive performance. The young artist seemed to hype up the crowd almost effortlessly with his collected stage presence, all while being backed by his band, who seemed just as chilled as Rome himself. However, this laid back personality did not stop him from delivering the fun during his set, interacting with the crowd as often as possible, and dancing with those who were in the front.

This all accumulated in the ending sing ‘Narcissist’ in which Rome developed into the crowd, who lifted him up and carried him round the audience. It served as a sign of how much he was beloved, and a powerful ending to a chilled, yet exciting performance that seemed to make the artist smile as much as it did the audience.

Last, but definitely not least, was Beabadoobee, also known as Bea, who seemed to exuded star quality as soon as she stepped out on stage. It was here that the crowd was at a peak frenzy, with members of the audience attempting to get as close to the barriers as possible, all to see the young artist, who responded to the madness with laughter, before thanking her fans for the noise.

As she delved into her set with the song ‘Are You Sure’, the frenzied crowd turned into a dancing one, instantly jumping and screaming with each track, and sings soft, yet impactful vocals. Like Lang, Bea, and her band seemed to switch between her softer tracks such as ‘Coffee’ and her energetic pop filed tracks such as ‘If You Want To’ with ease, an admirable skill considering how she only started playing guitar two years ago.

As the set continued, the audience kept up the screaming and even-bra throwing, however,  the singer remained professionally unprofessional throughout, dancing and having fun with her band until the very end of her, short but impressive setlist. She ended the night with crowd favourite ‘she plays bass’, a definite highlight of her discography. It was here that her softer and more energetic sounds seem to blend together, with the fast-paced, yet relaxing track allowing the singer to show the best of vocal abilities, all while getting the crowd moving till the very end.

As Bea took her final bow, the audience seemed to cheer in appreciation for all the varied, yet talented acts they’d seen that night. It’s not a secret that the Dirty Hit label are on the forefront when it comes to finding the best of new artists, but it was this night that proved just now innovative they, and the artists they feature truly are. Whatever Oscar Lang, No Rome and Beabadoobe plan to do next, chances are, we will hear about it.

You can listen to more from Dirty Hit Records here.