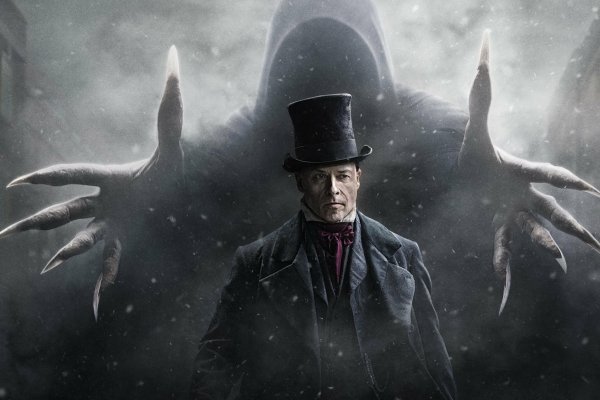 Missing the Christmas festivities already? We’re taking a look back on the BBC’s gritty adaptation of Charles Dickens’ A Christmas Carol.

Reimagined for 2019 by Peaky Blinder’s producer Steven Knight, the BBC’s A Christmas Carol offers up a brutal scouring of Dickens’ original festive fable. Directed by Nick Murphy and with Tom Hardy on the list of executive producers, it was bound to offer up an interesting take on the much-loved classic.

A psychoanalytic scouring of one man’s journey to redemption, Guy Pearce stars as a reptilian Ebenezer Scrooge, joined by Andy Serkis as the long-suffering Ghost of Christmas Past. Yet, this well-acted and skilfully cultivated production is lost among a dense bombardment of monologues from a Scrooge who seems more pre-occupied by his own obsessive commentary than the ghosts who appear in his chambers. For example, the reincarnation of a childhood pet, Scrooge’s small white mouse, is lost amongst a myriad of over-explained symbolism (supposedly for the benefit of those watching at home, just in case we missed the significance of childhood innocence?)

Whilst we can all appreciate the need for a reconsideration of the commercialised insincerity which so often dominates Christmas in the 21st Century, it seems the BBC has rather missed the mark of subtlety that Dickens’ work has to offer. Poignant moments of Scrooges’ self-reflection are lost in a cloud of inaudible mumbling. The first episode offers a drawn-out analogy of Ebenezer’s bitter distaste for the festive period. This could have been a refreshing anti-commercial stance. Except, we remember that Scrooge is a ‘tight-fisted hand at the grindstone’ money-lender. So, touché?

Pearce offers a chilling but relentlessly deliberate self-monitoring of Scrooge’s character development. This somewhat labours the point of his redemption in the last half of the final episode. We are encouraged, or rather forced, to question why it is that Ebenezer Scrooge is so very miserable. Is it because his long-dead business partner Marley (played by a disappointingly un-Scouse Stephen Graham) is still obsessively on his mind after seven years? An interesting touch that is left suspending in mid-air.

Instead, what we get is a ‘squeezing, wrenching, clutching, grasping’ dredge back in time through a harrowing re-imagining of Ebenezer’s childhood. Eventually we learn that after a time spent at home with his verbally abusive father, a young Ebenezer is sent to boarding school. Forbidden to return home during the Christmas holidays, he is sexually abused by his headmaster. After years of torment, his sister Lottie arrives to take Ebenezer home, (in a surprising twist holding the schoolmaster at gunpoint), not realising that she is too late; and the boy she brings home is a very different soul to the one who first went away.

It is a powerful re-imagination of the backstory Dickens never provided. We are forced to confront an unsettling and deeply traumatic interpretation of Scrooge’s past. It somewhat explains (though, as the ghost of his sister is keen to point out), does not wholly excuse his contempt for the festive period and everyone in it.

The Insignificance of the Other Ghosts

Charlotte Riley stars as Scrooge’s dead sister, Lottie, who manifests as the Ghost of Christmas Present. She catalyses a greater turning-point in Scrooge’s character-development than any of the other spirits he encounters. Yet she is forced to achieve all this within a twenty-minute window of screen time, in comparison to the first two entire episodes dedicated almost entirely to Marley’s self-centred purgatorial fretting.  The ever-silent Ghost of Christmas Yet To Come is given even less. But with his mouth sewn together, it seems unlikely we’d have received anything more than a few dark stares from the corner of a badly-lit graveyard crammed into the final fifteen minutes either way.

Likewise, the Cratchit’s story is overshadowed by the possibility of Scrooge’s sexual involvement with Mrs Cratchit (Vinette Robinson.) In a desperate bid to fund a life-saving operation for Tim, she approaches Scrooge for financial help and is given a mercilessly impossible preposition. Her faithfulness to Bob, or the life of her child. A family who otherwise provides a moment of tender rest-bite is instead brutally tainted by Scrooge’s sinister involvement in the family affairs.

What we have been provided with is a scouring post-Freudian interrogation of Dickens’ 1843 novella. Not leaving much room for any ‘God Bless Us, everyone’s’, Steven Knight’s adaptation takes very few lines from the actual book itself and twists it so far out of shape we wonder whether there is much left for Scrooge. Other than to give Bob a not un-modest £500 and bugger off, we can’t help but think it’s probably for the best. He certainly doesn’t become like a father to Tiny Tim; more an estranged great-Uncle that we’d rather not talk about.

The BBC’s adaptation certainly offers a new perspective, and all things considered, what do I reckon?