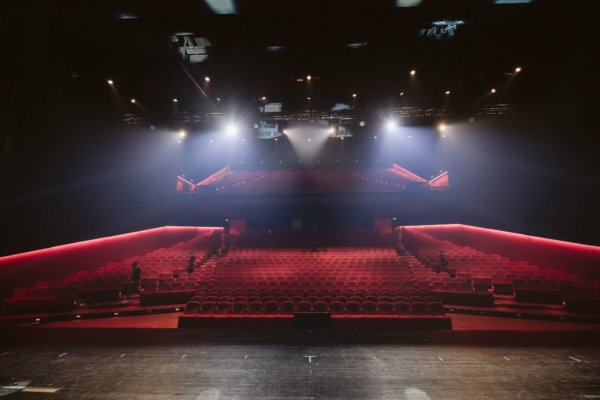 Mary Shelley’s Frankenstein at The Playhouse

“Beware; for I am fearless, and therefore powerful!”

Mary Shelley’s iconic 1818 novel Frankenstein has been adapted numerous times since its publication. Notable adaptations include the 1930’s James Whale film starring Boris Karloff and the 1950’s Hammer Horrors, although Frankenstein has thematically pervaded through many other science-fiction stories. This November, The Playhouse staged their own adaptation of Frankenstein, directed by Rona Munro.

This adaptation used Mary Shelley as a character within the play. Actor Eilidh Loan gave Shelley a very twenty-first century, fourth-wall-breaking feminist voice. This works well in certain scenes – such as the scene where Victor Frankenstein (Ben Castle-Gibb) is figuring out the scientific method needed to give his ‘monster’ life mirrored by Shelley creating the plot of the novel, both scribbling intensely on the table. The use of Shelley further worked when she addresses Frankenstein’s Monster (Michael Moreland) to tell him that she will now allow his story to be heard.

I personally found that the presentation of Shelley in her fantastical drive to create a ‘horror story’ removed much of the sadness of the Monster’s state found in the original source material. Munro opted to present the Monster’s violence as an act of vengeance, rather than a result of the pain of misunderstanding and ostracism. Shelley’s derisive comments of Frankenstein’s character and ‘strong men’ in general reflect a feminist outrage. The narrative that she, the creator, dismisses her character of Frankenstein reflects the way that he dismisses his creation, the Monster.

Becky Minto’s set was stark, using angular building sets and dead trees that are reminiscent of the sets in 1920’s Gothic films such as The Cabinet of Dr. Caligari. The composition of the scene when Frankenstein is creating the Monster used the stage well, using string lighting to illustrate the electricity needed to generate life in the Monster.

I can imagine that this adaptation would appeal much more to a younger audience; the language is modernised, and Shelley offers a different dynamic than that of the original novel.  Yet this production can be jarring for those who are aware with Shelley’s story, as using Mary Shelley within the narrative of her novel alters the dynamic of the story. I admired how – Mary Shelley’s characterisation aside – the plot stayed true to the 1818 novel and did not consider the previous film adaptations.

“Life, although it may only be an accumulation of anguish, is dear to me, and I will defend it.”

For more information on this adaptation and its tickets, click here.