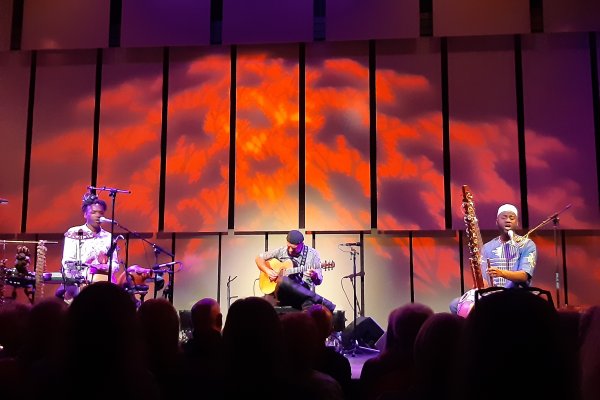 AKA Trio @ the Music Room | Interview and Review

On Wednesday night (20/11/19), Liverpool’s Music Room was graced by AKA Trio. The group is comprised of three of the British jazz scene’s most technically gifted and exuberant international musicians: guitarist Antonio Forcione (Italy), kora player Seckou Keita (Senegal) and percussionist Adriano Adewale (Brazil). The trio are currently touring in support of their debut album, JOY, and despite the frigid weather and an unfortunate malfunction with the venue’s front door that left many punters waiting in the cold, the crowd seemed to be echoing the album’s sentiment.

After the doors finally opened, the trio kindly agreed to talk to me. The group sat around a table, silently warming up as they chatted, and casually, answering questions. Forcione spoke on the band’s origins and what makes their eight-year collaboration so special:

“London is a centre for meeting – a meeting point. That’s probably where we all met, we come from different places and as you know music has no barriers so there’s a lot of curiosity for each other… I actually believe that every collaboration is different because the musicians are bringing their own stories. Music is not a template that we all play, the template is your life and your emotions and how you channel through your language. Here we are, three musicians from different places, speaking different languages but also telling different stories in one project. It- it just happens; the magic of the music.”

That magic was apparent from the moment the trio began to play. This particular configuration of instruments and amalgamation of styles from all over the world is a tricky one to balance, but with their first number, ‘Joy’, it was clear that their interplay was so natural and seamless that there seemed to be something deeper fuelling it, than careful planning or a strong knowledge of theory.

“When you have open minded musicians there’s no domination of anything, of your tradition, of your playing. It’s more of like… supporting each other, looking at a lot of similarities, and celebrating at the same time, our differences. It’s a great thing. It’s a joy to see that happening, with less effort.” Keita explained, “the name JOY is really what we have when we’re together. And when we talk about joy, it’s not just about the music we provide which is joyful, it’s just hanging together. And making this music, the process of making this music is the joy.”

This, more than anything else, was the most overwhelmingly prominent aspect of AKA Trio’s performance. The three musicians clearly had so much love for one another, constantly communicating while they played through eye contact and earnest grins at their excitement for something one of them had just played. The music itself was a stunning balancing act, providing both a sense of calming serenity and exhilarating grooves with dextrous improvisation. The compositions weaved together jazz with musical styles from the three musicians’ varied backgrounds.

Tunes like ‘Saudade’ and ‘Empathy’ were quiet numbers with satisfyingly tactile grooves, that gave Adewale ample opportunity to get wonderfully expressive with his percussion playing, moving gracefully around his impressively eclectic rig of percussion instruments from around the world. Forcione and Keita, meanwhile, would deftly and gracefully trade rhythm, bass and melody between them, in a powerful expression of musical conversation.

Between numbers, the trio took turns talking about their childhoods and the ways in which their instruments chose them. There was a real focus on how much their tunes expressed that unimpeded love for music they all had in their youths, but aside from myself, there were very few young people in the crowd. Most of the audience were middle-aged or elderly, so it seemed pertinent to ask about the lack of young people in the room, and at jazz concerts in general. After some joking about my being better positioned to answer that question than them and some debate about the role of social media and marketing that they felt was somewhat beyond them, they began to get rather introspective about the music itself:

“I tend to think that we’re not out of fashion because actually this is very new, and I see this as almost avant-garde, what we’re doing. This is something new, sharing together different music from different places in the globe,” Forcione ponders, Adewale and Keita nodding along in agreement.

“There is this need, I think more from a commercial point of view to box you into a certain style, but then I don’t think we fit in one particular style,” Adewale says, responding to a question about the band’s relationship to labels like ‘jazz’ or ‘word music’, “…then, I think, the answer would be we are AKA.”

Every tune in AKA Trio’s set at the Music Room had a story behind it, and more often than not, those stories were about experiencing a new culture or something that united the three musicians. These topics ranged from the trio’s experience engaging with local musicians in Cuba for the piece ‘Baracoa’, Forcione’s journeys around South Africa and Zimbabwe for ‘Madiba’s Jive’, to their shared love of football for ‘The Beautiful Game’.

Before playing the tune ‘Empathy’, Keita spent some time introducing his instrument, the kora, to the audience, many of whom had not encountered one before. Forcione then took the opportunity to talk about their mission to bring different people and cultures together with their music, making an effort to reassure the audience that in a time where some seek to divide people, “we do not do that”. He described their style as “music that unites”, and whether or not AKA Trio is easily labelled or marketed to young people, the music itself radiates togetherness from its very core, and for our generation in particular, it might be just what we need right now.

You can buy AKA Trio’s debut album, JOY, here.