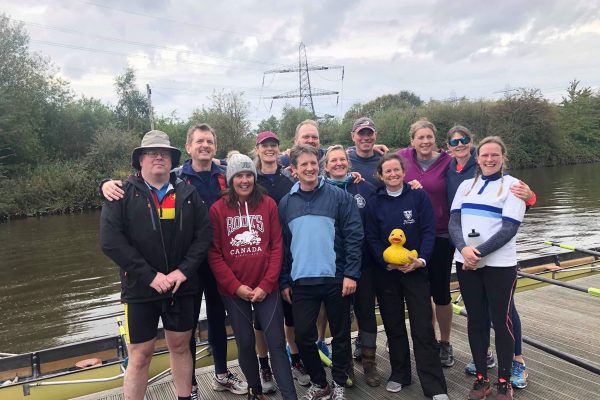 Liverpool University Boat Club had an oarsome start to the academic year with a visit from ex-University of Liverpool rowing legend, Alison Mowbray. Olympic silver medallist Mowbray made a splash on the visit on October 6 to Runcorn Rowing Club, where LUBC train on the River Weaver when she pitched in with the first beginners’ session of the year.

To make it extra special, brought with her 11 other alumni of the boat club who rowed together 27 years ago in 1992 – all of whom are still in contact these many years later! All the help was needed with around 60 beginners in crew boats of 8.

After decades competing at the highest level in the sport, Mowbray, aged 48, is now a part-time coach; and also gives motivational speeches all around the UK. Mowbray, who achieved silver at the 2004 Summer Olympics in Athens as part of a quad, graduated with first-class honours from the University of Liverpool before completing her PhD in Molecular Biology at the University of Cambridge.

For many of the novices, it was their first time rowing on the water – and they soon realised just how difficult it was in a boat compared to machines in the gym. But with Mowbray’s patience, expertise and experience it wasn’t a surprise that within the space of an hour, she had most of the novice 8s rowing as a full crew with great timing.

“It all began here. I remember getting off the water after my first session thinking ‘this is for me’.’’

In the break during the middle of the multiple water outings, the club was lucky enough to hear a speech in the club house by Mowbray. She talked about her rowing career, starting at LUBC and progressing to achieve a Olympic Silver medal with Team GB. It was interesting to hear that it was certainly not one easy path to her success.

At the time, LUBC was not as developed as today, so it was fascinating to hear about the old wooden boats that the alumni had to make do with. The club now has a boat, a Stämfli 8, named after the illustrious alumna.

It was great for members to hear about how she found her passion for rowing at our very own Uni. This was especially useful for the Senior Squad who train 6 days a week in order to perform well at regional and national events, such as the upcoming Head of the River Fours, BUCS, and the Henley Royal Regatta throughout the year.

Hopefully the current LUBC team will still be rowing together 27 years on!

Further information for anyone interested in getting involved is available at https://www.livunibc.com/