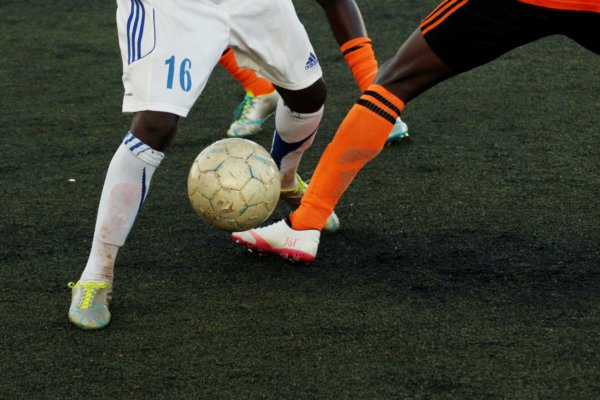 “MANWELL is for men from all walks of life. We’re a bunch of blokes who want to get fit, meet new mates and be part of a community that supports us through all of the challenges that come with being a man in the 21st Century.”

I went out to Herron Eccles Playing Fields in Allerton on a cold, dark Thursday evening to meet Sean McGivern. Sean is one of the founding trustees of MANWELL, and I wanted to find out more about the charity and what they offer to men in the Liverpool City Region. We started off by discussing how the idea for the charity came about.

It was in September 2017, a group of 10 of us who hadn’t played football had got out of shape. We were dead after 5 minutes, but every week more and more came. Although we were knackered, it was enjoyable because everyone was in the same boat and there wasn’t an 18-year-old legging it past you and wondering ‘what’s the point.’ The whole point of football is enjoyment, but also the camaraderie and brotherhood mentality that came about. Within the first 3 months collectively we lost 3 tonne (3000kg) across about 80 fellas.

From a mental health side of things, it led to people starting to open up and just generally talk about things. While it started with the idea of weight loss, the social inclusion is the glue which binds everything together, and within a couple of months, eyes were being opened because ears were being opened. Instead of people thinking “you’re a man, get over it”, it became “you’re a man and you feel down- that’s sound, because you’re a man and a human being.”

Once the first person opened up and spoke about how they felt, it was almost like, bang! People realised they weren’t on their own, and that there wasn’t a stigma around feeling down or depressed. Before we knew it, cliques were forming, as well as, really close friendships of men within the Liverpool City Region, which made us think we need to do more with this. It can’t just be “Our little thing.”

I then raised the point that would their system of roll-on/roll-off subs potentially make it easier for people to raise their hand and say they need a break and come off, rather than the usual macho-footballing mentality of just trying to play on regardless and say nothing to save face, despite the fact this would have a negative personal and collective impact. So that once someone clears the mental hurdle of accepting there isn’t something right physically, it might help them to open up in terms of their mental state.

I think it’s that first stage of acceptance. Quite often we get messages from wives, siblings and children saying this would be great for a loved one. Quite often we’d have a conversation with someone we’ve never met before lasting 20-30 minutes, and they’d be crying by the end of it. To give you an example, I’ve just seen someone in the changing room who was encouraged to come here by their wife.
She felt like she had lost him, he witnessed a horrific event 10 years ago, and had retreated into his shell ever since, she felt that while he was still alive, she had effectively lost him. Even getting him to talk on the phone took weeks, we were texting at first trying to very gently break the ice, chipping away at that mental wall until he felt comfortable enough to open up.

Do you think that the fact that there is probably a natural drift from our childhood friends, means this works as a really useful “refresher” for gaining new friends?

In a lot of ways yeah. I can look back at hundreds of people at my 18th and 21st birthday, but you grow up and things get in the way. This is a chance to get a break, and get away. Before MANWELL, what would these lads be doing on a Thursday evening? Nothing. Because there’s nothing better to do, well now there is.

We finished by discussing how the introduction of a ball, and a sense of competitiveness means it’s much easier for people to physically push themsleves in their exercise.

If you put a ball 20 yards away, you’ll bust yourself to run for it, and then you’ll do it again for the next ball. If you asked someone to run a mile on a treadmill, or across a pitch they’ll get bored and probably pull out before the end.
Once you stop, it’s hard to get going again. But if you sprint and chase a ball, then stop and go again you’ll find it much easier. Of course, when the ball goes out or down the pitch you’ll get your break; but you’ll end up running much further than a mile during the game.
The fact that you’re in a team, gives you that added motivation with your exercise and weight loss to push yourself slightly more for the collective. We have a “Team Award” for the team who, as a collective, have lost the most weight, so not only can you win the league but you can also try and win the weightloss league. So even when people are injured, they still try to keep active and keep the weight off to help in that respect when they can’t on the pitch.

For anyone looking to get involved, or wondering how the programe works. Sean explained it for me in great detail.

Effectively you sign up through the website, and you will be asked some non-intrusive questions at the start, which will only be viewed by the trustees. The reason for this is so we can assign the teams in the fairest way possible. For example, if we have 8 lads who are over 25st, and 8 who are below 17st we’ll try to spread them evenly around the teams. But we also do it with age, so all the teams are as fair as we can possibly make them and this is checked by the algorithms. If you look at the tables, everyone is fairly close, and this is the same on the scales as well.
We also have a portal, which lets an individual track weight loss which is only viewable for them, with links for them to get more information and tips.
We have people playing from 18-63. We also have a lot of people who have never played football before in their life. We hold an annual game at Prenton Park (Tranmere Rovers Stadium), and you could see people who had gone from never playing before, to in a very short space of time, playing a full 11-a-side Football League game.
Especially if you’re new to the city as a student, this is a brilliant way to meet people and get to know the city better. Straight away you have your game of footy, and countless fellas who will increase your friend group in the city. We also hold regular social events such as Fifa Nights and Shuffleboard Competitions.

In addition to the 7-a-side Thursday Night Weight-loss Football, they also offer a Monday night 9-a-side team, Sunday friendly football, an 11-a-side team and a variety of fitness sessions – click here to find out more. Registration with MANWELL costs £25, which comes with a membership card and access to other MANWELL events. Monthly football subs cost £10.

I’d like to thank Sean for his time, and encourage anyone to give the team a shout if they feel this could be of benefit to them, or someone they know.