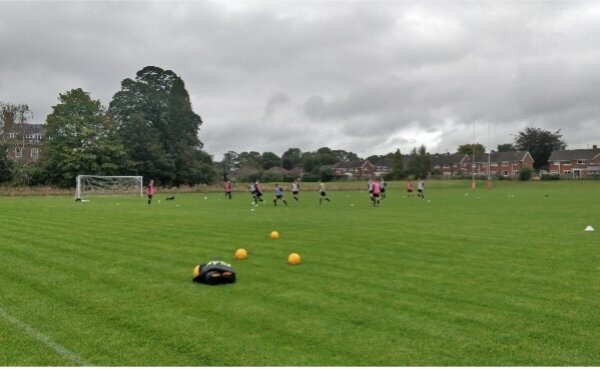 UOL Men’s 1st won 4-2 in their first league game of the season. The chemistry between UOL players and their 3 month long training was evident. In contrast, the Chester team seemed disorganised and were lacking in the link-up play department compared to UOL.

UoL had to adapt their approach to goal kicks and had to go for a long ball rather than playing the ball short from goal kicks due to the pitch being unusually narrow.

UoL got on to an early lead when in the 4th minute, Toby Cogswell picked a good pass for Tom Edwards out wide who took a shot from outside the box on his preferred left foot. The Chester keeper got a touch on the ball, but couldn’t stop the ball from going in.

Tom Edwards scored another goal 3 minutes later after a powerful shot from Dan Lewis which the keeper could only parry. The ball landed to Tom’s feet who taped the ball in from close range.

It wasn’t all good news for Uol though, as Luke Jones had to come off with a muscular issue. Alex Blair came on to replace him at centre back.

In the first half, Chester didn’t have much possession and mostly went for long direct balls to attack.

Joe Ctori, who was today’s man of the matched pinged a beautiful ball to the right side of the pitch which led to a thunderous shot from Frankie that went just inches over the bar. Very close!

Minutes later, Joe Ctori put in a dangerous cross in for Dan Lewis who hit it the ball on target, but the Chester keeper was able to parry it for a corner.

Just as UoL were increasing the pressure, Chester got two big chances on goal but fortunately, Jack Edwards rescued his team with two amazing saves.

Chester started pushing more towards the end of the first half but overall, UoL were sharper and more dangerous with the ball than Chester.

Joe Ctori and Matt Molyneux were linking up on the left throughout the whole half which caused Chester a lot of problems.

Chester started the second half strong with a good run by their striker in the 3rd minute who found himself one on one with Jack Edwards (gk) for a few seconds before a great tackle from Alex Blair to recover the ball.

Chester’s attacking efforts paid off moments later during a moment of confusion from the UoL defence which led to UoL conceding an own goal.

In the 54th minute of the second half, Joe Ctori made another brilliant run down the left side to make a great cross for Tom Edwards who couldn’t finish on this occasion.

Jack Edwards made another amazing save in the 60th minute to keep his team in the lead.

In the 61st minute Danny White and Louis Jarvis came on for Matt Molyneux and Toby Cogswell.

In the 72nd minute, Theo Hayford came on in midfield for Frankie Pashias.

Minutes later, during a counterattack, Theo Hayford made an excellently weighted pass for Dan Lewis who found himself through on goal and scored.

The substitutes who came on for UoL were just too much to handle for Chester. Gaps in the Chester midfield started to appear.

Chester managed to score from a set piece in the 83rd minute, reducing the mark to 4-2.

Following their goal, Chester increased the pressure and committed more men forward. Theo Hayford was able to win a free kick and gave his team a chance to catch a breather and reset. Dan Heald took the free kick and shot the ball just inches over from the bar. Close one!

4-2 to University of Liverpool Men’s 1st.

Overall, it was a dominant performance from UOL who deserved the win. UoL were more comfortable on the ball, used their full backs and winger to linkup and create chances. UoL had better chemistry, understanding and intentions with the ball when compared to Chester, who in contrast were disorganized and privileged long balls.

UOL Men’s 1st play their next game at home on Wednesday 20th of October against Lancaster University.